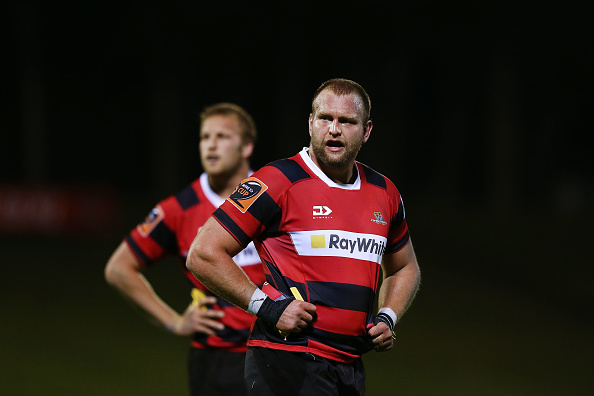 Joe Moody has been named in Canterbury's starting line up along with fellow All Blacks Codie Taylor and Sam Whitelock. Photo: Getty Images
Canterbury will understandably maximise the use of their soon-to-be departing All Blacks contingent when they face their first genuine Ranfurly Shield defence of the season on Saturday.

Taranaki lifted the Shield with a stirring 55-43 victory when they last challenged Canterbury in 2017 - so co-coaches Reuben Thorne and Mark Brown are fielding their strongest possible side for the second leg of a doubleheader at Orangetheory Stadium.

Bledisloe Cup and Rugby Championship-bound Joe Moody, Codie Taylor and Sam Whitelock are named in the starting pack, while All Blacks debutant-in-waiting Cullen Grace is named at No 8.

Playmaker Richie Mo’unga and wing George Bridge add experience to either side of the rookie midfield combination of Rameka Poihipi and Isaiah Punivai.

Irish prop Oli Jager is a notable inclusion at tighthead for his first game since he was knocked out by a sickening blow from Highlanders midfield back Sio Tomkinson late in the Crusaders Super Rugby Aotearoa-clinching victory in Christchurch on August 9.

Flanker Tom Christie also makes his first appearance for Canterbury this season. He will play for the first time since the North v South match on September 5.

New Zealand sevens representative Andrew Knewstubb makes the step up to Mitre 10 Cup level for the first time as outside backs cover after making his Canterbury debut in the shield defence against North Otago.

Punivai starts at centre after an impressive performance off the bench in the opening round win over North Harbour in Albany, with Dallas McLeod (toe) unavailable through injury.

Meanwhile, the Canterbury women’s team play the second match in their group when they take on Otago as their defence of the Farah Palmer Cup gathers momentum after they opened their season with a 36-10 victory over Manawatu.

The other provinces in their pool are Wellington, Hawke’s Bay and Tasman, while Auckland Waikato, Counties-Manukau, Bay of Plenty, Northland, Taranaki and North Harbour make up the other group.