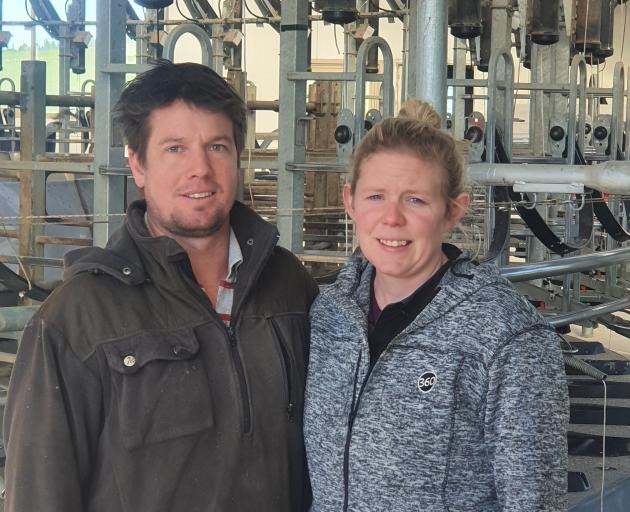 Mr Kane comes from a 1000ha sheep and beef property on the banks of the Pomahaka River, in West Otago, and he never thought he would be milking cows.

"I started working for Kelso Contracting when I left school, and a lot of our work was in dairy development. I realised there was money in dairying," he said.

The family’s property was bought by his great-grandparents David and Nellie Kane in 1929 and originally run as a dairy and sheep farm. Hereford cattle were added in 1963.

His parents, Robert and Mary-Anne Kane, and brother Peter now run the sheep and beef operation, with 1200 ewes, 500 hoggets and about 200 beef cows, as well as running dairy beef calves and their Westholm polled Hereford and Blue Mountain Angus studs.

He convinced his parents 11 years ago that converting 230ha of the property into a milking platform would be a wise business move.

They added a further 111ha as a run-off five years ago.

Mr Kane and his wife, Nicole, were heading into their 11th season as both lower-order sharemilkers and co-owners under Riverview Sharemilking Ltd.

They have 685 cows and their target is 320,000kgMS "providing the weather plays the game".

They have a 54-bale rotary shed and their effluent goes through a double weeping wall into a storage pond before being spread by a travelling irrigator.

One of the main issues with the property was regular flooding from the Pomahaka River.

"We are guaranteed to have a flooding issue every 18 months and sometimes we get more.

"If the river does not break its banks during each flood event, it chews up the river bed.

"It is getting closer to the point where it is becoming less of an issue for low-lying paddocks."

The inability to bring in migrant dairy workers as well as experienced overseas staff for rural contractors’ businesses was a key concern.

"The next six months are only going to get worse [with staffing shortages] through the silage and agricultural season."

In addition, the Otago Regional Council’s water management plan needed to be "front of mind" as well.

He also considered duplication of paperwork and reports for on-farm operations, including nutrient loss, fertiliser and spray-use measurements as required by different council or government departments, to be a "bugbear" and he would like to see some sort of "one report meets all requirements" introduced.

Mr Kane would like to see more young people entering the agricultural industries.