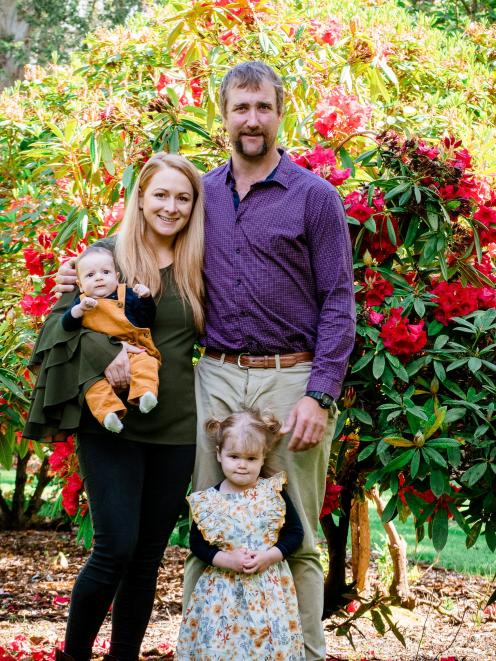 Alongside raising their young family, Nigel and Leanne Woodhead farm sheep, rear dairy calves and Mrs Woodhead also has a graphic design business. They are pictured last summer with Finn (now 1) and Sienna (now 3). PHOTO: SUPPLIED
When Nigel Woodhead took over the family farm six years ago, it wasn’t in his nature to carry on the operation in the same fashion “and just do what the old man did” and it’s been a big learning curve for him and wife Leanne.

The young couple are not shy of a little hard work and finally results are starting to show.

Mr Woodhead’s parents bought the farm in 1993 and in 2015 the couple bought the stock and plant and took on the lease of the farm.

Not long after taking on the lease Mr Woodhead won the New Zealand Young Farmer of the Year competition. It was a high he says he rode for almost three years with personal development, travel, speaking engagements and an “epic” opportunity to be part of the Primary Sector Council which put together the Government’s Fit for a Better World campaign.

While Mr Woodhead had many amazing experiences and opportunities since the competition, he concedes it was also extremely challenging to find his feet farming in his own right.

“Leading up to the competition, I was working till 10am every morning on the farm and then I would spend the rest of the day and into the night studying. That was my life for four months. The bare necessities were getting done on the farm but that was it.”

Not surprisingly, those first three or four seasons were tough.

“The production coming off the farm just wasn’t where I expected it should have been. There’s always seasonal variables to factor in but, to be honest, it just wasn’t as easy to farm as I thought it was going to be.

Before moving home, Mr Woodhead had completed a bachelor’s degree in agricultural science at Lincoln University and went on to work in agronomy for a seed company based in Ashburton.

“When you’re young and fresh and think you have all the answers, and it will all be easy. Well, that soon wears off and it can be a hard pill to swallow. The highs are great, but the lows can really bugger you.”

The last 18 months has seen a mental shift for Mr Woodhead; he has put his passion for agronomy to good use and is seeing a lift in production.

“I feel like I have finally got my head around a few things. It’s also about trialling a few things when I know I have the room to make errors; when there’s a bigger mortgage bill to worry about is when I hope I have learnt from all the mistakes I need to make!”

The couple work as a team each year, rearing dairy calves while also parenting 3-year-old Sienna and 1-year-old Finn.

Mrs Woodhead also has a home-based graphic design business. With a gap in the local market for wedding stationery and sign hire, her workload has become extremely busy.

“Leanne works extremely hard. She is works early mornings and late at night to get through the work, she’s very driven.”

Mr Woodhead said her work ethic comes from being immersed in the overall result of the project, and a pessimistic accountant may have also added to the determination: “he told us there was pretty much no point setting up a separate company as most farmers’ wives’ sideline businesses don’t last long. Well, that’s all we needed to hear to prove otherwise.”

With the odd lamb starting to show around the place, Mr Woodhead is looking forward to the season ahead.

“We are finding our way. We are pretty bloody lucky we get to bring our kids up in such a healthy and connected way.”