Petition to save Tip Top launched 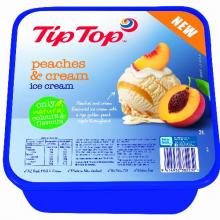 Some Fonterra farmers are incensed over the co-operative's plan to sell Tip Top. Photo: Supplied
A petition has been launched to save Kiwi ice-cream brand Tip Top after Fonterra confirmed it was on the market.

Rumours had been circulating that it might be up for sale as Fonterra looked to streamline its operation and reduce debt.

In an update on a board-led portfolio review, chairman John Monaghan said FNZC had been appointed external adviser as it considered "a range of options".

"We want to see Tip Top remain a New Zealand-based business and this is being factored into our options."

While performing well, Tip Top was the co-operative's only ice-cream business and had "reached maturity" as an investment.

To take it to its next phase successfully would require a level of investment beyond what Fonterra was willing to make, Mr Monaghan said.

News of the potential sale was met with outrage from some Fonterra suppliers, including Taranaki farmer Matthew Herbert who felt strongly about keeping the brand owned by Fonterra farmers.

Shortly after the announcement was made, he launched an online petition to "save Tip Top from the chopping block".

New Zealanders ate more ice-cream per person than any other country and Tip Top ice-cream was one of the biggest links between fresh New Zealand milk from Fonterra farmers, and people who lived in the country's cities, he said.

Mr Monaghan said the milk price revision was due to global milk supply remaining stronger relative to demand which had driven a downward trend in the GlobalDairyTrade index since May.

The bank expected more New Zealand production strength than Fonterra appeared to have factored into its forecast, and did not expect dairy prices to lift over coming months as Fonterra did.

A first-quarter business update showed the co-operative's gross margin of $646million was down $14million compared to the same period last year and up slightly on a percentage basis from 16.6% to 17%. Revenue of $3.8billion was down 4% and sales volumes were down 6%.

The co-operative generally made a smaller proportion of its total annual sales in the first quarter, due to the seasonal nature of its milk supply, chief executive Miles Hurrell said.

That meant the first quarter results did not give much insight into the co-operative's expected earnings performance for the full year.

However, it did put the spotlight on where it had challenges that needed to be addressed. In particular, there were challenges in its Australian ingredients, greater China foodservice and Asia foodservice businesses.