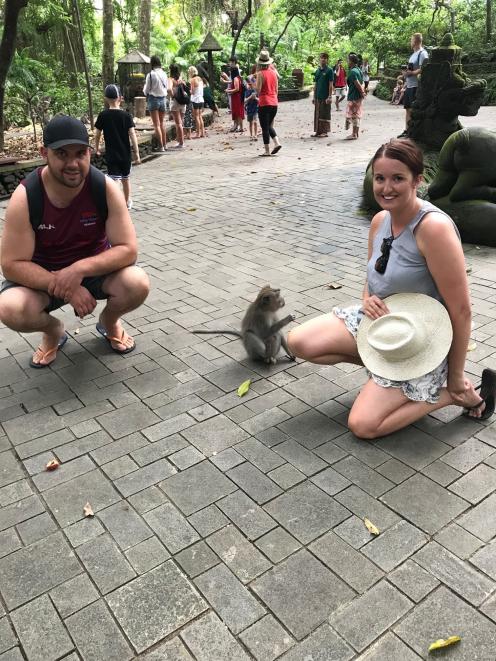 Not only were they stunned to hear their name announced as the winners of the Share Farmer of the Year (SFOTY) competition in the 2019 Southland-Otago Dairy Industry Awards, they also spent a couple of weeks in Bali shortly after.

The awards dinner was held in Invercargill on March 27, and they won nearly $12,000 in prizes and four merit awards.

Mrs van Dorsten said they were stunned and thrilled with their success, especially as it was the first time they had entered.

"It was a huge surprise when we heard our names announced.

"It has been quite surreal [since]."

She said all finalists in the SFOTY section were first-time entrants.

They will represent the region at the national competition in Wellington in May and had already received offers of help and support in preparation.

Mrs van Dorsten said they had booked the holiday prior to the function and their children, Lachlan (5), Edward (4) and Jonty (1), were with her parents in the North Island.

Their individual cow production averaged 457kgMS/cow and this year it had risen to 465kg.

Mr van Dorsten said the feedback from the judges had been "pretty positive but there were a few things we could work on in the future with our business".

The merit awards for human resources was particularly important to them as they were keen to encourage their staff, Kaelen Hill and Tim O'Connor, to develop their skills and progress through the industry.

They also believed in leading by example.

"We are both passionate about progressing people through the industry and making them aware it is a good industry to be in," Mrs van Dorsten said.

The couple moved from the Waikato to a farm in Riverton in 2008, then spent three years at Isla Bank before moving to Outram, where they have been for two years.

Mrs van Dorsten works on the farm when she can.

"We juggle it because I love milking and do that when Cameron is home to look after the boys.

"The three boys can get quite excited, and be quite adventurous."

They have recently completed a Farming to Freedom programme, run by Sheree and Dylan Ditchfield, of Wendonside, who won the New Zealand Sharemilker of the Year title in 1999.

Mr van Dorsten said in the next couple of years they intended to consolidate debt.

They eventually hope to own a farm or equity partnership.

Mrs van Dorsten is a committee member for the South Island Dairy Event, which is to be held in Invercargill in June.

Mr van Dorsten is a keen rugby player and trail bike rider, but has had little time for either lately.