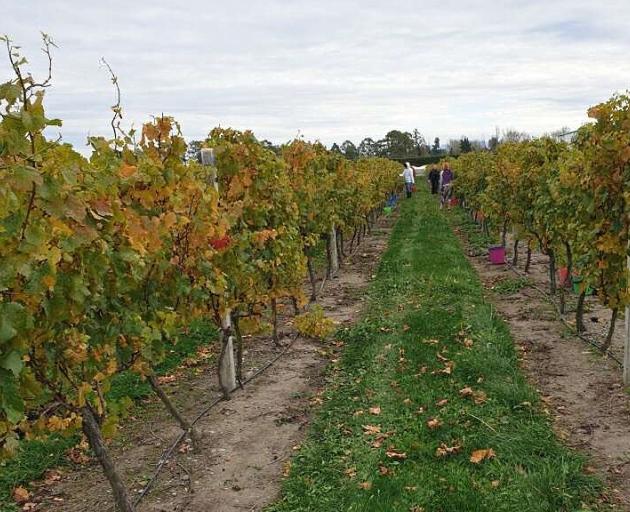 Bumper crop ...One and a-half tonnes of grapes were harvested to make pinot noir wine. PHOTO: SUPPLIED
CharRees Vineyard owners Charlie and Esma Hill put a call out on social media for help to harvest during lockdown.

They were so overwhelmed by community response, including some from Christchurch, they had to turn people away.

The lockdown harvest, approved by Ministry for Primary Industries as essential for food and beverage production, attracted about 20 people from Ashburton and Methven — many who had never harvested grapes before — to put their hands up to help.

The pickers worked alongside family members of the couple and vineyard workers to pick the first of three annual grape harvests.

The tonne and a-half of grapes picked, which registered an impressive 24 brix (high in sweetness) on the refractometer, will make the 2020 pinot noir wine.

It is now with winemaker Kirk Bray, in Waipara, who was also impressed with the harvest, ‘‘citing it as the best he’s seen from us’’, Mr Hill said.

It will take at least 15 months before it will be available for sale but some of the grapes will go towards making sparkling rose, available at the end of the year.

“I’m more than happy with what we got considering the hail damage [late last year] ... we were very lucky with the extra effort put in to the vines,” Mr Hill said.

“It won’t be the best, but as far as quality goes, it is one of the highest ones we’ve had.”

The next harvest will be pinot gris grapes this month, and the final harvest is the riesling grapes, which could be up to a month later.

Mr Hill, grateful for the response from people, said was a good few hours picking, over two days, working under conditions very different from normal.

Aside from providing face masks, gloves and hand sanitiser and sterilising tools between users there was social distancing to take into account.

Mr Hill said grapes for riesling had been kept as late as Queen’s Birthday weekend in the past but it would depend on the weather.

“There is a heap of green leaf there yet,” he said, which is one of the ways to judge the level of ripeness needed to flavour the wines.

Other ways include taste, look and firmness — but getting them before they shrivelled and lost too much moisture. The refractometer gauged sweetness.

In the past, the vineyard has used local service club members for harvest, which they had done as a fundraiser, but lockdown restrictions had made many of them unavailable.