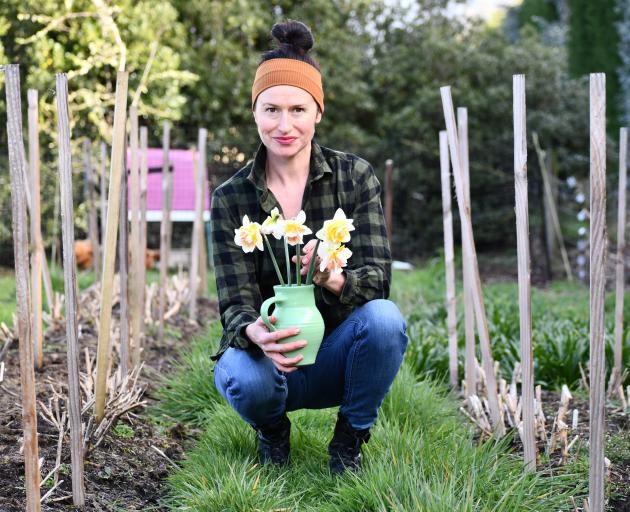 Blooming Heck owner Penny Campbell, of Invercargill, knows what it feels like to have to throw out flowers due to lockdown restrictions. PHOTO: LAURA SMITH
Locked-down flower growers in Auckland are having to turn their blooms to compost, and an Invercargill grower understands their pain.

During last year’s Level 4 lockdown, Penny Campbell, of Otatara, did just that.

It was her first year operating her small business, Blooming Heck, and unable to sell her flowers under lockdown restrictions, she chucked them.

That experience meant she understood what her northern counterparts were facing at the moment.

Deemed non-essential, the industry was crying out to the Government to let growers find a safe way to sell their perishable wares, she said.

"I hope something can be changed."

Ms Campbell mostly grew flowers for summer, so felt for the bigger businesses.

"I feel sorry they are losing all their stock, and it’s being turned to pretty compost."

They could lose months worth of flowers, she said.

While flowers might be considered non-essential, she felt they brought a lot of joy to people.

Her advice to those wanting to support businesses affected was to buy from them when possible, to pass the flowers on to brighten someone’s day.

A member of the Floral Business Activator, Ms Campbell received an email from its founders, calling for support for those in the Auckland region who were under lockdown.

"Although flower farming is considered as part of New Zealand’s primary industries, flower farmers have been separated from other agriculture and horticultural businesses in their Covid-19 regulations," the message read.

"Instead of cut flowers being regulated with other perishable crops they have been grouped with plant and nursery products and services.

"Even as dispensations have been granted to the plant nursery sector, cut flower growers have been ignored."

Flower farmers needed a lifeline to stop the needless waste of cut flowers that could easily be distributed safely direct to consumers or via other other local retailers deemed essential, such as supermarkets, dairies, greengrocers and petrol stations, it said.

A Countdown spokesman said the supermarket company was proud to source most of its flowers from local growers.

"We also import some flowers from overseas due to certain varieties being out of season or unavailable locally."

As many of its growers were based in the Auckland region and unable to operate under Level 4, it had had a very limited supply of flowers over the past few weeks.

"But with most of the country now in Alert Level 2, customers should start to see more spring flowers and floral cheer beginning to return to our stores," the spokesman said.

"We hope to be able to offer our full seasonal range in the coming weeks."