Clyde Orchards co-owner Kevin Paulin looks over the Earnscleugh Rd shed that will have a retractable roof and house three hectares of cherries. Photo: Alexia Johnston

A New Zealand-first development is taking shape at Clyde Orchards — a shed with a retractable roof will house three hectares of cherries.

Owners Kevin and Raymond Paulin, who could not yet confirm how much the development would cost, will plant thousands of cherry trees in the shed, boosting the company’s overall crop to 30ha.

They have been working on the project over winter, with the aim of getting it ready for planting so produce will be available in three years’ time.

They started investigating the idea of a shed with a retractable roof 18 months ago and finally settled on a kitset construction from Canada.

It is the first of its kind to be built in New Zealand, and just the second in the world for growing cherries, Kevin said.

The sheds are more commonly used for berries, tomatoes and vegetables. 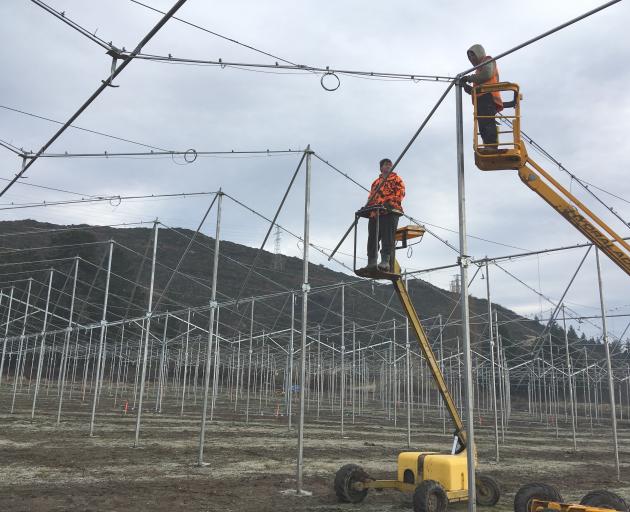 Duncan Direen (left) and Matt Reeves work on the shed last Friday. The project has an estimated 400cu m of concrete and 1200 poles. Photo: Alexia Johnston

Kevin said there were two main benefits of the shed at Clyde Orchards, which he said was like a large glasshouse, made mainly of plastic.

‘‘The two things we are using it for is protection of the crop and to take advantage of the fact it is [like] a glasshouse, [allowing us to] manipulate growth.’’

He said an early variety of cherry will be planted so the crop would be ready for export to Asia two to three weeks earlier than usual.

‘‘It’s going to be a little bit of trial and error. Anything more than a week [earlier than usual] will be good.

‘‘The whole principle [of the] structure is to protect the crop from wind, rain and hail, but have it totally retractable [so] when we don’t need that protection the trees will just grow in a natural environment.’’

He expected the roof would be open most of the time.

A team of workers has worked through winter to get the framework installed, which so far includes about 400 cubic metres of concrete and 1200 steel poles.

The team still has a couple of months of work ahead before planting of the cherry trees begins.

Kevin said although it was ‘‘never going to be easy’’ getting the shed constructed in winter, it was the only option to coincide with the planting season.

Te aim was to have the estimated 5000 trees planted by the end of September ‘‘at the very latest’’.