0 Comments
The dogs may be the stars of the show, but behind the scenes of the South Island sheep dog championships, two men and their horses are the unsung heroes.

Each day Galloway man Alan "Snow" Stewart and horse Raisin, and Ray Stewart, of Gore, on horse Miko, mustered the 3000-odd merino sheep on Earnscleugh Station to be used for the dog trials.

It took two half days to drive the sheep the 15km across the station, where, over the course of a week to 10 days, they were "broken down" — put into smaller mobs of 50, 30 then 20 sheep and introduced to the courses to prepare them for the championship.

There were always a few "roughies" in the mob and it was a chance to "take the edge off" them before the competition, Snow said.

Each day, the men and their horses drove the sheep off the hill, ready for the trials to start.

Sheep had an important part to play in the success of dog trials.

"If you have good sheep at a trial you have happy campers — if the sheep continue to get away people are not happy — but if the sheep are good at the trial, everyone goes home happy that they had a fair crack."

The championship is the only one in New Zealand to still be using merinos.

"Merino, they’re definitely sheep where if you try to bully them around too much they just won’t respond to you," Snow said. 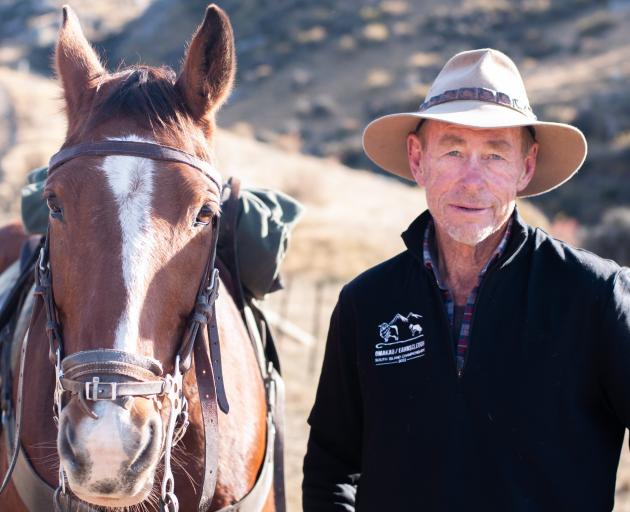 Omakau-Earnscleugh Collie Club member Alan "Snow" Stewart, of Galloway, with horse Raisin on the final day of the South Island sheep dog trial championships at Earnscleugh Station.PHOTO: SHANNON THOMSON
"You have to make them think they’re in control, but you’re in control."

A passion for the hills, the stock, dogs and horses drew him to the role for the week — he did the same at the New Zealand Sheep Dog Trial Championships in Greenvale last year.

The competition concluded yesterday and the men would return to the hills, mustering the sheep back to where they came from.

More than 200 triallists and about 500 dogs from throughout the country took part in the South Island sheep dog trial championships on Earnscleugh Station with finals for the zig-zag hunt and straight hunt on Thursday, and the long hunt and short head and yard finals taking place yesterday.

The final results on the fifth day of the South Island sheep dog trial championships at Earnscleugh Station. —