Golden Shears 2019 world champion woolhandling team (front, from left) Pagan Karauria, Sheree Alabaster and manager Ken Payne at the awards ceremony in Le Dorat, France in July. PHOTOS: SUPPLIED
Audiences impatient for a famous Kiwi victory before the All Blacks take centre stage this weekend might do well to head south on Friday.

New Zealand's world championship shearing and woolhandling team returned from the Golden Shears in France in July with several hard-fought wins under their belt.

On Friday night, team manager Ken Payne will be spinning a woolly yarn or two on the squad's extended European tour.

Proceeds from the event, being held at the South Otago Town and Country Club in Mr Payne's home town, Balclutha, will go towards the Otago Shears, being held in Balclutha on February 8.

Mr Payne - a Clutha district councillor and shearing tutor - said being called upon to manage the team of 10 shearers, woolhandlers and officials was a "huge'' honour.

"It was an accolade I will take to my grave and, if offered the opportunity to do it all again, I would.''

In traditional shearing fashion, the team had worked hard and played hard, he said.

The "work'' side of the equation had paid off with several tour and world championship victories, as the team made its way through Scotland, France, England and Wales.

Topping the table were Allan Oldfield, of Geraldine, in the blade shearing individual final; and Oldfield and Fairlie's Tony Dobbs in the teams final.

Mr Payne said almost as heartening as the victories was the level of interest in the four-day event, which attracted more than 63,000 spectators.

"Our competitors were performing in a half-million-dollar, purpose-built marquee to sell-out crowds of 4500. Who says it's not a spectator sport?'' 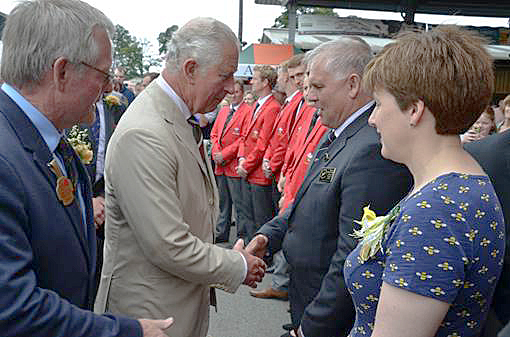 Mr Payne shakes hands with Prince Charles at the Royal Welsh A&P Show in Llanelwedd.
The rural village of Le Dorat, between French heartland towns Poitiers and Limoges, had struggled to host the influx of visitors.

"Every possible bit of accommodation was booked for miles, and restaurants were overflowing with people waiting up to two hours to get a seat. It was incredible.''

Following the world championship's visit to Invercargill in 2017, the 2019 Shears were the 18th outing and attended by 33 countries.

The next event was scheduled for "Dunedin of the north'' Edinburgh in 2022, he said.

Among his many personal tour highlights was an official encounter with Prince Charles, at the Royal Welsh A&P Show in Llanelwedd.

Greeting a line of show dignitaries, the prince was not above a bit of banter.

Remarking on England's controversial "super over'' World Cup defeat of the Black Caps the previous weekend, Mr Payne said the heir to the throne smiled broadly, before quipping, "Shame about the cricket, old chap.''

"The accompanying photo shows me me suppressing an emotion I thought better left unsaid.''