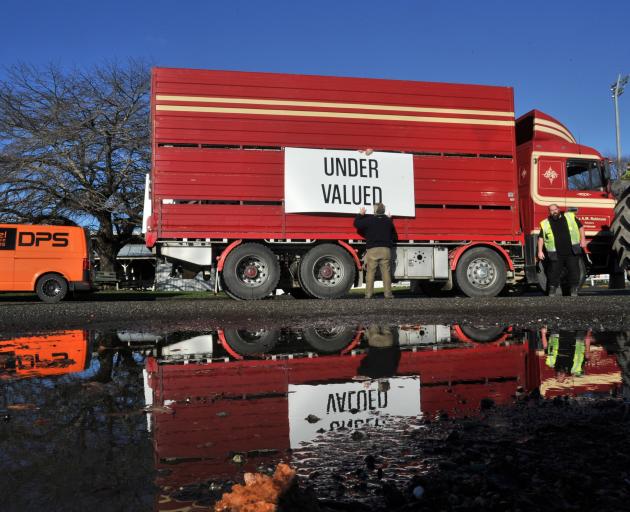 A truck parks up at a Groundswell protest at Gore last month. PHOTO: GERARD O’BRIEN
The circulation of misinformation on environmental reforms is contributing to bad farmer mental health, the head of an environmental advocacy group says.

He raised the topic of the Groundswell protests, which were held across the country, including in Otago and Southland, last month.

Many of the topics at the conference related directly to their concerns.

During a panel discussion on what policy levers are required to transition to sustainable land use, he said he had got to thinking about Groundswell and mental health.

“There’s a lot of disinformation and misinformation about what all these reforms are about and how that isn’t helping,” Mr Taylor said.

An example he gave was that significant natural areas have had to be protected since 1991.

“There is nothing new there.”

He wanted to see more leadership from the sector to get “true facts” out there.

Fibre and food sector think tank Te Puna Whakaaronui co-chairman Lain Jager said he knew he would have to be brave to be on the panel.

“First of all, let me just acknowledge the conversation is tough,’’ he said.

“The reason farmers are right in the middle of this is because when we’re talking about the quality of our environment, farmers are responsible for a lot of it through their day-to-day living.”

There was an evolution in farmer practice when putting the environment first as a priority, he said.

“It’s messy, it’s a rolling ball. There are violent politics within the sector.

“When you criticise the likes of DairyNZ and Beef + Lamb and say we’d like you to stand firmer . . . in order to be effective they need the support of farmers across the country.”

The average age of farmers in New Zealand was 60.

They felt beaten up, and they felt financially threatened.

“There is a lot of tension in the community, exacerbated by some organisations and political parties who appeal to people who are less progressive.”

He said Mr Taylor was quite wrong if he thought those agencies were anything other than trying to lead a progressive agenda.

Ever wondered how NZ farming is reported to the rest of the world?
https://www.theguardian.com/world/2021/aug/05/emissions-from-cows-on-new...
Interestingly this was not a headline story here in NZ and was covered in a very different way.

Confusing the issues further, it is unclear what is meant by 'progressive'. Geez, can you speak man - on - the - land lingo?

A "progressive" is usually someone who endorses change, stated simply, someone who says the way we have been doing this is wrong and we need to start doing it this way.
The opposite of "progressive" is "Conservative". Stated simply, someone who resists change, who says we've done it this way for generations there's no reason to change now.
In a NZ political context ACT and their minor supporting party National are regarded as Conservative. Labour and the Greens are regarded as Progressive.

Absolutely. But a 'progressive' farmer would look to increase returns. In the story, progressive must mean good environmental practice.

Laura Smith raises an interesting and important issue. If there is a skerrick of truth in what she is reporting then it needs far more attention and in-depth examination.
If the misinformation being loudly proclaimed by the squeaky wheel known as Groundswell is a significant contributor to s deterioration in farmer mental health then this needs to be blown wide open.