Freshwater rules that mean consents will be needed for intensive winter grazing on any farmland sloping more than 10 degrees, are setting up a standoff between farmers and the Government. PHOTO: STEPHEN JAQUIERY
Stop the degradation, show real improvements in five years, restore New Zealand’s waterways in a generation, and infuriate how many farmers? Environment reporter Hamish MacLean checks in on the fight for healthy rivers after 100 tractors rolled through Gore last week in protest over new freshwater regulations.

Southern farmers are facing reams of new rules and red tape as New Zealand starts to go hard on keeping sediment, E.coli, phosphorous, and nitrogen out of its rivers.

But Federated Farmers calls some of the new rules "unworkable" and prohibitively costly, and says they will need to be amended by Cabinet.

Federated Farmers environment and water spokesman Chris Allen says a parade of tractors down Gore’s main street and a gathering of hundreds of farmers in Invercargill last week amid public calls for ignoring the new rules en masse are representative of farmers’ anger about the costs and the extent of the changes being forced upon them.

"Farmers are being held back, but they are just sick of all this stuff coming down the road.

And the new rules would lead to litigation, he said.

It is a lot to take in at once.

The new freshwater regulations were brought in with the new National Policy Statement for Freshwater Management 2020, new national environment standards, new stock exclusion regulations, and amendments to regulations for the measurement and reporting of water takes.

Mr Allen said the fundamental change was the "hierarchy" of priorities. Now the needs of the environment came ahead of everything else.

For the past 10 years, despite calls for change, the health of New Zealand’s rivers had been in a holding pattern, he said.

There was clearly a significant deterioration in the health of New Zealand’s rivers that coincided with an extensive intensification of agriculture that began nearly two decades ago.

"And since then things have not shown any signs of significant improvement — there’s a little bit here and a little bit there, but nothing dramatic," Prof Closs said.

"Up until now a lot of the [regulations] have been fairly soft."

In the first iteration of the policy statement for freshwater in 2011, the aims were not measurable, or meaningful.

"It was like page after page of motherhood statements," Prof Closs said.

"It didn’t really say anything. Whereas now, you can see it evolving, it is starting to get some teeth in it.

"Now we are starting to see things you can actually measure — it is starting to have numbers and figures on it."

What was an 11-page policy statement had turned into 70 pages.

There were new rules designed to halt further loss of natural wetlands and streams, put controls on high-risk farm practices such as winter grazing and feedlots, set new bottom lines on measures of waterway health, preserve and restore the connectivity of New Zealand fish species’ habitats, and make real-time measuring and reporting of data on water use mandatory.

The new regulations are the culmination of a Government freshwater reform programme under way over the past three years.

They were developed by a multi-agency water task force led by the Ministry for the Environment, working with four advisory groups involving the primary sector, scientists and academics, Maori, environmental groups and local government.

Prof Closs said people should be able to confidently get into the Taieri River, or the Clutha, or the Waikouaiti, anywhere along its reach and swim in it and not get sick.

"I think that’s a reasonable expectation and I think it’s achievable.

"We’re not far off it now in many of those systems, and with good practice, yeah, I think we could do it, and I don’t think it would take as much — cost as much — as a lot of people think."

While nitrogen is water-soluble, sediment, E.coli, and phosphorous all travel together over land and some of the simpler regulations were aimed at stopping those three contaminants from entering waterways.

Intensive winter grazing, a practice Fish & Game New Zealand has labelled an "environmental disaster", no longer qualifies as a permitted activity in many cases under the new rules.

The practice involves stock being grazed on specially grown crops, with farmers using electric fences to ration feed to animals in small amounts.

Consent requirements for winter grazing on a slope, crop planting timing, and pugging — the deep hoofprints left behind in a paddock — are the three matters concerning farmers the most.

Prof Closs said new rules determining what sort of slope you could graze animals on without consent had been introduced because the steeper the slope of a farm, the harder it was to stop contaminants getting into rivers.

From May 1 next year, farmers will need a resource consent for animals to graze on land more than 50ha or 10% of their farm, whichever is the greater, or on paddocks with more than a 10 degree slope.

Crops sown this spring should be planted with these requirements in mind, the Ministry for the Environment says. 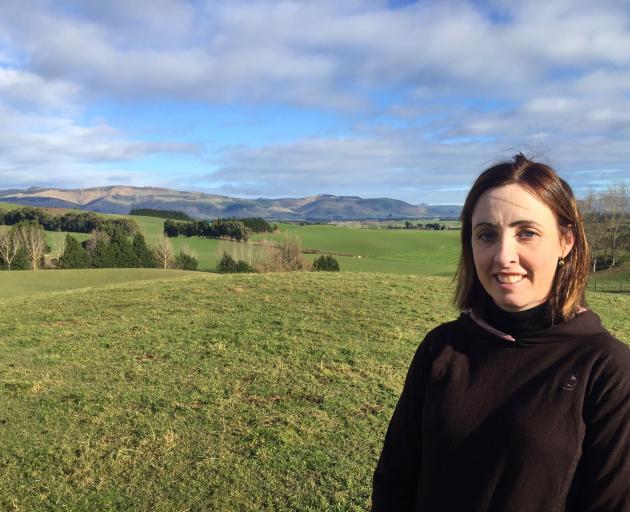 Southland Federated Farmers vice-president Bernadette Hunt says the issue is that southern farms are not flat and virtually all farmers doing winter grazing will be caught up in the rules.

The downstream effects of these new rules had simply not been thought through, Mrs Hunt said

At present, she did not need to apply for a consent for winter grazing on her farm, but under the new slope rules she would need a consent to farm the vast majority of paddocks on her 174ha farm. That would undermine the land value of the farm.

The new rules also state that when there is a heavy rain event, bare soil is more likely to be washed off a paddock and so the land used for winter grazing must be planted as soon as it is practical.

In Otago and Southland, that can happen no later than November 1, the rules say.

Ms Hunt said farmers had an interest in replanting paddocks sooner rather than later anyway, to ensure they were not wasting productive land and yet the timing for planting was out of farmers’ control.

Some varieties of crop could go to seed if they were planted too early, or if planting was done when the ground was too cold it could require farmers to redo the job, perversely impacting the quality of the soil.

"It’s a rule that has been written by someone who doesn’t understand," she said.

Pugging was deemed by farmers to be problematic when it damaged the root structure in the soil, but a new rule that an animal’s hoof print 5cm deep triggered a consent requirement was "just arbitrary" and would be unenforceable. 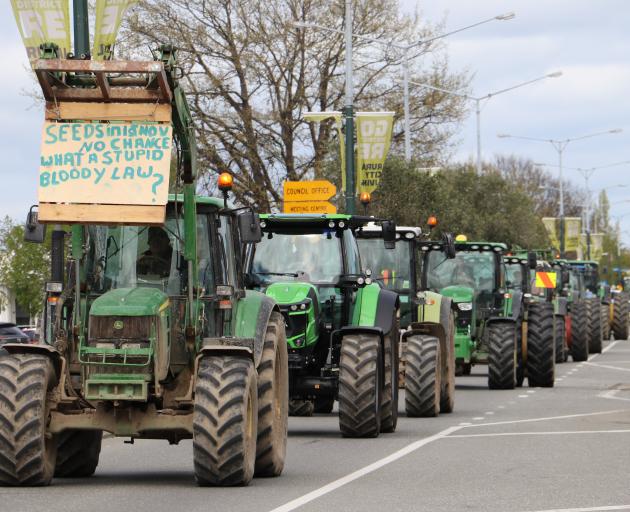 Some of the more than 100 tractors which drove through Gore last week to protest freshwater reforms. PHOTO: SANDY EGGLESTON

There were already practices in place to mitigate the risks of wintering on slopes, such as a 3m buffer zone between winter crops and waterways, grazing animals towards waterways, and protecting areas where water was likely to accumulate.

"These rules are also bad for dairy farmers . . . it lifts the bar massively on consenting."

A common call from farmers is that the public discourse has turned the agricultural sector into whipping boys on the freshwater issue, when those pointing the finger from towns and cities conveniently escape any blame.

But the new policy statement does require urban waterways to be cleaned up and creates new protections for urban streams.

Some of the worst polluted rivers were in the cities, but they made up only a fraction of polluted waterways in the country, where most waterways ran through "overwhelmingly" agricultural land.

The country did not need to spend money to fix the environment; "rather we need to get rid of the failed system that allowed it to be harmed in the first place", Dr Joy said.

"You do not create wetlands, you stop draining them.

"You do not ‘clean up’ rivers, you stop polluting them."

Dr Joy, who was on the science and technical advisory group for the freshwater rules development, has called for a drastic reduction in the number of dairy cows in the country, and says under the current model it is "utterly impossible" to have a future that honours the Treaty of Waitangi, that can transition to zero-carbon, and have drinkable water for all.

"A low intensity, highly diverse farming model is our only possible future," he said.

How we get there could be a fraught road.

Waikato sheep and beef farmer Graeme Gleeson, who was on the primary sector advisory group for the freshwater rules development, said he hoped the Government had heard the wrath of farmers and recognised that it had got things wrong.

Most submissions were from farmers and it seemed most of their suggestions had been ignored.

If the rules as at present were followed to the letter, there was no doubt some farmers could lose their livelihoods, he said.

I totally agree with Dr Joy. With only 1.5% of New Zealand's farmland currently growing fruit and vegetables we need to diversify, lower stocking rates and farm imputs.
In addition animal agriculture contributes to species extinction. The monumental habitat destruction caused by clearing native flora and funa and converting land to grow feed crops and for animal grazing. The widespread use of pesticides, herbicides and chemical fertilizers used in the production of feed crops often interferes with the reproductive systems of animals and poison waterways. The overexploitation of wild species through commercial fishing, as well as animal agriculture’s impact on climate change, all contribute to global depletion of species and resources.

The fact that the new rules will lower the value of some properties is not worthy of consideration. These new unsustainable farming practices have vastly over-inflated the value of some properties as people sought to profit from the new farming methods. Had the purchasers done their due diligence, they would have seen that the properties were unsustainable and over valued. That is entirely their own responsibility and they should take responsibility for that. Buyer beware, let the market sort it out and let the industry learn the hard lesson it has brought upon itself.