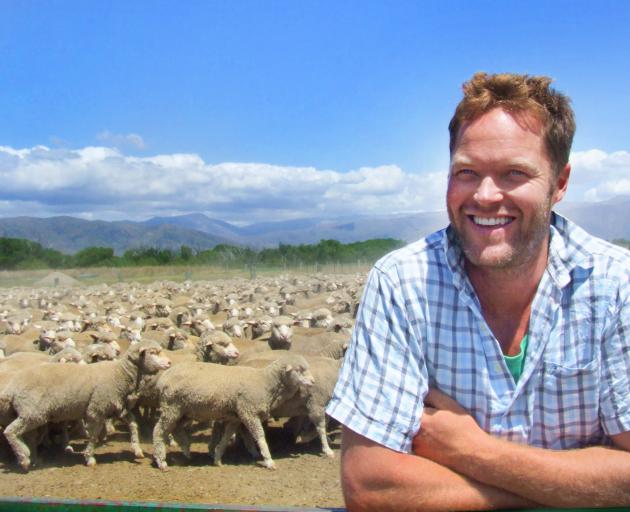 Quailburn Downs manager Trent Spittle is supplying merino wool for Kathmandu’s new merino clothing range. PHOTO: SALLY RAE
When it comes to the future of farming, Omarama farmer Trent Spittle believes it will be the end users of products who will decide what happens on farm.

So when approached by outdoor equipment and clothing retailer Kathmandu to be involved with a marketing campaign for its new merino range, showing the entire process from on the farm through to garment manufacturing, he was happy to oblige.

The property was bought in 2006 by his parents Graeme and Diane, who farm at Te Anau, and the two properties have combined stock unit total of about 25,000.

Kathmandu bought merino wool from Quailburn Downs last year and approached Mr Spittle to be involved with the marketing initiative.

It was the company’s first merino range, and it had brought manufacturing back to New Zealand for it, he said.

The fact the company wanted to highlight the whole process, rather than just one segment of it, appealed to him.

He was also delighted to see Kathmandu getting into using merino fibre. It was good promotion for merinos in general, he said.

Filming took place at Quailburn Downs over three days and included drone footage of the property and shearing.

Brought up in Te Anau, Mr Spittle was educated at Fiordland College. After leaving school, he spent 14 months working at Godley Peaks, near Tekapo, where station manager Rob Glover became a mentor to him.

Mr Glover came from a background of working with crossbred sheep and he had learned a lot from him about merinos, which were very different to work with than the Perendales on his home farm, he said.

That sparked his interest in the breed and was probably what led to him chasing jobs that involved merinos, he said.

Mr Spittle then headed to Lincoln University to do a diploma in farm management. On completing his studies, he took a job at Hunter Valley Station, at the head of Lake Hawea, as a shepherd.

That was followed by a summer at Buscot Station, at Omarama, before he lived in Australia "on and off" for a couple of years, doing harvesting and working on a specialist cropping farm.

His first real management job, where he was left to his own devices, was at a relatively small sheep and beef farm at Springfield, in Canterbury.

From there he moved to the Omarama area, firstly managing Ohau Downs and then Ribbonwood, before moving to Quailburn Downs five years ago, when he turned 30.

Since then, it had been "bloody full on" as the Spittle family embarked on a development phase. That included about 200ha of irrigation — comprising four pivots — the impact of which had been "huge", virtually doubling the stocking rate.

Putting in pivots was the "easy part"; it then required learning how to manage it and that could take a while.

A lot of the pasture going into production was native and that also took a long time to become productive.

Doing it in stages — with a pivot a year over three years — worked well; he learned as he went before moving on to the next one.

As much as 500ha of dryland development had been done along with about 60km of fencing between both the pivots and the hill country.

All that work had been a great challenge. Now, with most of the development done, the focus was on "just refining what we’ve got" and stock numbers were unlikely to increase.

He liked the "great aspect" of Quailburn Downs — "a hill in the middle of flats" — and that it was still reasonably low country so he did not get snowed in, Mr Spittle said.

He enjoyed the climate and the lifestyle the Upper Waitaki afforded; Quailburn Downs was handy to Omarama, and was also in good proximity to water-skiing in summer and snow skiing in winter.

He acknowledged the chance to manage the property was a great opportunity for someone his age. It was likely that in the next financial year he would buy some stock and plant.

He was always looking to advance his knowledge and was keen to apply for a place on the Rabobank farm managers course.

When it came to environmental matters, he had been working alongside Environment Canterbury staff, which he believed was a good approach.

Many farmers were trying to upskill and were open to making changes, he said.