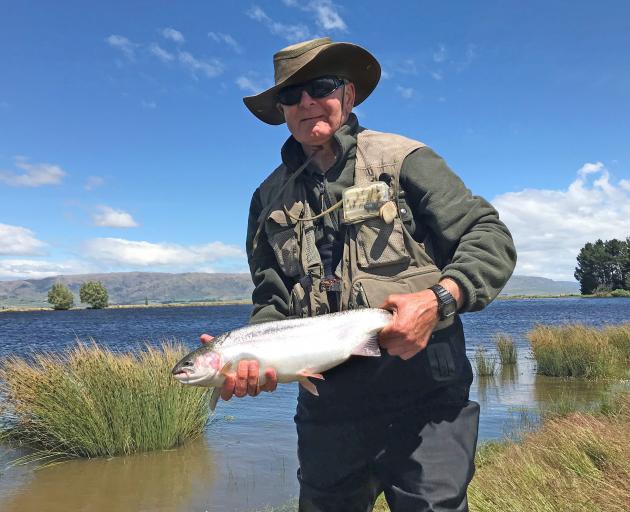 Mike Weddell holds a 2kg rainbow trout he caught from Blakelys Dam in the Maniototo. The rain that we have had so far this week has had little effect on rivers. PHOTO: SUPPLIED
Despite the Taieri at Outram more than doubling in flow, it has only gone from very, very low to low.

The ground is still dry, so it would take a good downpour to raise rivers significantly.

So, as I tap out this column, all waters are still fishable.

If there is heavy rain, there are still the dams to fish, except Rutherfords and Blakelys which are now closed.

River temperatures are still in the low teens which is ideal for hatches and therefore for fishing.

At this time of year, it takes more than a rise in water level to put trout off feeding.

I remember one year fishing at Wyndham with the river running well above summer level, making it a bit of a lottery fishing blind.

I was sure there would be a hatch of duns in the afternoon so filled in the morning by fishing a backwater which held some good fish.

I returned to the main river in the afternoon and experienced a rise to duns that lasted about three hours.

There were enough fish rising in one pool to keep me there throughout the hatch.

More recently, I fished the upper Taieri in pursuit of rising trout — I did find three and caught one of them but luckily the proximity of the dams saved the day.

I actually started the day on a frosty Blakelys Dam. The frost did not last long and it was soon hot.

Even so, there were trout rising regularly when I got there.

I got into a position to cover an area where several fish were moving and worked out a length of line ready to target the next rise.

A fish rose and as I lifted off, a fish hit the fly hard but was not hooked and it took off stirring up the water as it went on its way.

I plugged away and, third time lucky, I landed a 2kg rainbow.

I tried another area without a take, so, moving again to a spot that has produced quite a few fish over the years, I covered the area even though there were no rises there. It was not long until I was hooked into another fish which was just under 2kg.

It was very hot by this time so I moved to the river, with lack of success as mentioned above.

Afternoon tea remotivated me so I went to Mathias Dam for the last hour.

The water was very low and I started at a favourite spot.

There was no response to the damsel fly nymph/water boatman combination on the first few casts, so I let the flies sink for about 30 seconds before commencing a slow retrieve.

This resulted in a solid take, and over the next half hour or so, three fish came to the net.