Focus changes from from flocks to frocks 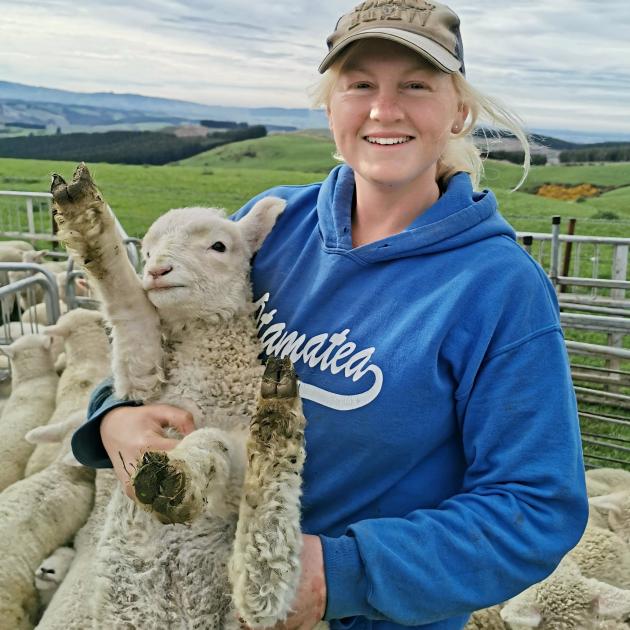 South Otago A&P Show Queen convener Bayley Coates at work on the farm. PHOTO: SUPPLIED BY BAYLEY COATES
It’s heading towards showtime in the South, with one of the first A&P shows taking place at the end of November.

The South Otago A&P Show will be held in Balclutha on November 28, the week after the West Otago show, in Tapanui.

The South Otago show’s youngest committee member, Bayley Coates, will be looking after a human flock this year.

The 23-year-old is the new Show Queen convener. Crowned herself in 2018, the Northland-born shepherd would have described herself as the most unlikely girl to put on a frock. However, she has learned to embrace that side of herself.

"Show Queen involves getting young ladies to boost their confidence and get out of their comfort zones. We get out into the community and we meet new people."

The experience gave her exposure to public speaking that she would not have otherwise got.

"Now I can get up and talk in front of people. I’m much more confident. Not that many people can do that. It got my name out there, and it allowed me to put down roots."

Brought up on a dairy farm at Maungaturoto in Northland, Miss Coates decided to study for a diploma in agriculture at the SIT Telford campus in 2015, rather than stick with dairying.

"I loved the animal side of it but I didn’t want to be getting up and milking, so I decided to learn about sheep and beef. It’s less repetitive (than dairying), and it gave me the opportunity to learn everything I could. And I decided it was the path I wanted to take."

In less than two years, she had worked herself up to a stock management role, and had plans to go overseas this year, to the wilds of Western Australia or Canada to work on cattle ranches. But the pandemic stopped that.

She went back to Northland for lockdown to be with her family — and to pick kumara.

"That’s one thing we can’t grow down here."

While she still had a fondness for the North, the South was definitely her home, she said.

She is in a relationship and happily ensconced on her partner Mathew Botting’s family farm near Balclutha.

"At the moment I’m working as a casual shepherd, helping where I can, while seeing some amazing properties and learning new approaches to different situations."

It has given her the flexibility to be involved in organising all-consuming events like Show Queen, and she has used technology to attract a good field of entries this year.

"I got it out on social media to make it relevant to our generation. Our generation use Facebook and Instagram, and I made a TikTok video (an app for making and sharing videos).

"It’s a skill I’ve learned to use since doing this. I really wanted to show the process that Show Queen goes through, to show what the girls do."

In her video, she locked off a shot that shows her in farm gear, and with a jump, she changes into an elegant outfit to show the transformation.

She was looking forward to scrubbing up for her event convener role.

"It’s good to have days when you can swap the boots and puttees for heels and get your face on, and I take advantage when I can. I enjoyed all the palaver much more than I thought I would."

She has also been involved with Clinton Young Farmers since leaving Telford, which helps run the New Zealand Young Farmers initiative AgriKidsNZ. The skills and theory-based competition will run in conjunction with the South Otago show.

"I love being involved with the AgriKids. It is such an awesome event to be able to showcase what farming is to kids who aren’t from the country. I was never an AgriKid, but I can see so much potential in the whole idea of it. I wished we had it at school."