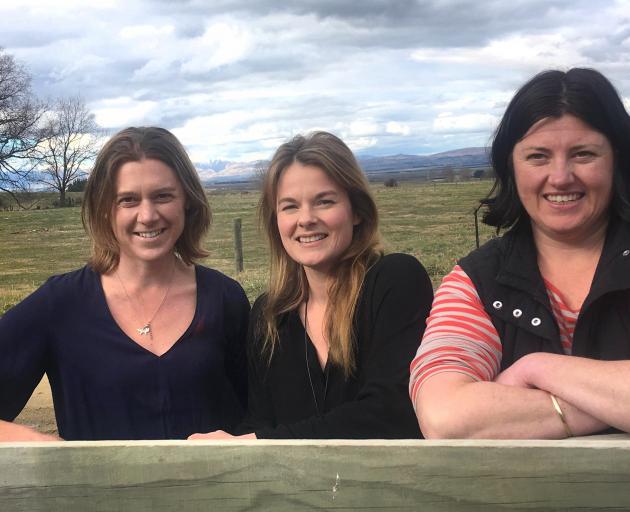 Water politics can be a dirty business - stormy, emotive and, at times, unforgiving.

Freshwater management has become a major political issue, with most Kiwis having an emotional attachment to freshwater and how it is managed.

In Central Otago, there is a trio of smart, motivated farming women with a passion for both the farming sector and the environment.

They come from diverse backgrounds yet have united in their concern for the health and wellbeing of rural communities such as their own, as they juggle farming and family commitments with a desire to show the wider New Zealand public farmers are not the bad guys when it comes to the environment.

Last year, Emma Crutchley, Frankie Hore and Kelly Heckler were involved with Water Maniototo, an initiative to portray a positive image of farming in the region and to show Labour's election pledge of royalties for commercial water use would be unjust.

The election has been and gone, but the trio continue with their push to highlight what they believe could be a world-leading governance model in the Upper Taieri, using group allocation and integrated catchment management group The Upper Taieri Water Resource Management Group, and the Otago Water Plan.

But the risk, as Emma Crutchley explains, is "it's going to pass us by". So they are pushing for constructive conversations and engagement with farmers, and calling for regulatory authorities to visit their patch to see what is happening and talk to those with first-hand knowledge of the area, all while respecting individuals' values.

Irrigation has transformed areas of the Maniototo. Photo: Stephen Jaquiery
Her aim was to gain a better understanding of the issues surrounding water resource management in a water-short catchment such as the Upper Taieri, and to apply understanding to help determine optimum policies and structures required to meet the needs of rural communities.

It could be said she already had water running through her veins: her father Geoff was massively involved with irrigation and water issues for decades.

When the Maniototo Irrigation Scheme was commissioned in 1984, she was 2 years old and some of her earliest memories were playing in the dust created by Ministry of Works scrapers.

Now she has been farming on the family property, Puketoi, for nearly nine years with husband Kyle Hagen and could not imagine what it would be like to farm in the traditionally dry area without irrigation.

Originally from Southland, Mrs Heckler was now involved with the family farming business at Omakau and also has her own farm environmental consultancy, AgriBasics.

She acknowledged the debate around freshwater management was a thorny one. As soon as it was raised, "everyone's hackles go up".

"The emotion is there. It doesn't need much prodding, that's for sure," she said.

But "no farmer wants to get out there and harm their own environment."

When it came to water issues, the awareness among the farming community had "definitely been raised" and now farmers needed to support each other to get plan change 6A "off the ground".

"It's got to be a supportive, positive environment," she said.

Change 6A requires water run-off from all properties to meet certain standards.

"I think the thing is we're all here because we want farming to go to the next generation and beyond. If we can help with that in any way, why wouldn't you? And we want to be proactive. We want to be telling our awesome story."

Farmers had started on a pathway and had not yet fully got where they wanted to be. It did not just happen in a year.

Urban-dwellers had to realise farmers often spent between $40,000 and $50,000 a year on the environmental side of their business, she said.

Mrs Hore said she and husband Andrew's decision to return to the Maniototo, where they recently took over the family property, Stonehenge, was driven by a desire to pass it on to the next generation.

It was a far cry from her previous career as an academic but it still involved a diverse group of people, all with things to contribute. To miss half the population in the rural community - the women - would be to "miss the point", she said.

When the Water Maniototo publicity came out, Mrs Hore received 200 emails berating her for dairy farming in the Maniototo.

The Hores are sheep and beef farmers - not dairy farmers - and she replied to every email and had some "interesting conversations".

"There a lot of angst out there. We're not liked [farmers]. That's why we constantly need to be saying what's awesome. I just want them to realise we're the good guys of the environment in New Zealand," she said.

With about 35% of the plastic found in oceans coming from "plastic clothing", farmers were the "good guys" with their tussock that stored carbon and sheep that produced natural, sustainable fibre.

Both she and her husband could go back to better-paying jobs - most farmers could - but they were sticking with working the land because they were passionate about it. It was not about the money and they "desperately do want to see clean rivers".

Instead of being scared of being different, she urged rural communities to consider that "different could be awesome".

"We could just show the New Zealand public what we can do. You don't have to do what everyone else does to be awesome."

In her Kellogg report, Ms Crutchley said the Resource Management Act and its implementation specifically in the Upper Taieri catchment resulted in a process that empowered different groups in the community to develop a governance and management model for water allocation that exceeded compliance requirements and created valuable social capital.

The Otago Water Plan was allowing for communities to solve catchment specific issues utilising a strong level of social capital that could achieve goals well above the required level of compliance. However, that outcome depended on the ORC's continued recognition of the value of community management.

New Zealand had a chance to be world leaders in freshwater management by using social capital to reduce compliance costs and achieve policy goals.

That was reliant on central and regional government recognising the value of community engagement.

If trust was not built between water users, stakeholder groups and regional authorities, it increased the likelihood of resource consent applications ending up in the Environment Court. That added significant time and cost, and the opportunity to create "win-win" scenarios was lost.

The agricultural sector could not afford to "sit back and ignore" the issue, Ms Crutchley said.

"They've got to be transparent and lead the conversations and tell their story ... tell the truth."

She would also like to see the ORC focus more on technologies available to support community groups rather than considering a more regulatory approach which would achieve a lower level of compliance.

Asked how the three women managed to fit everything into their lives, Mrs Heckler said it was "all a balancing act - kids, life, farming, everything".

Mrs Hore, who has two children, Tyrell (5) and Esme (3), and who looks after the administrative side of Stonehenge's farming business, admitted her "hamster wheels are on full pace" this week, as it was shearing time on the farm.

Completing the Kellogg programme had been a massive undertaking for Ms Crutchley, who has two children - Evelyn (5) and Reuben (3) - and it was due the day Evelyn started school.

The day after they made their Water Maniototo video last year, Mrs Heckler and husband James took baby Maggie to Starship Hospital in Auckland for open-heart surgery.

It was a tough time - "we weren't that far away from losing her" - but fortunately the little girl was now "awesome".

It had also highlighted the strength of rural communities as the local community had rallied around to support the family.

"Things like that, when you're at your most vulnerable . . . that's the good thing about rural communities," she said.