New Zealand Young Farmers (NZYF) organised the camp, which was one of five in the country, funded by Red Meat Profit Partnership.

"This is the first time we’ve run these camps (although they are similar to our Raising the Standard leadership camps) but with the added on-farm tours and agri-careers aspects.

"The camp was open to all senior students from Otago and Southland and we only had young women apply, so it was an all-girls camp."

The pupils attended a leadership development programme last Tuesday, then visited the Silver Fern Farms’ Finegand processing plant as well as Nigel and Leanne Woodhead and Hamish and Amy Bielski’s farms on Wednesday.

Enjoying a quick chat during the ‘‘Meat Your Career’’ camp at Telford last week are (from left) Lucy Goodeve, Amy Liggett and Tamzin Burgess, all of Columba College. PHOTO: BRIDGET JOICEY

They also heard presentations about options in agriculture, agri-business and agri-science from education providers on Thursday.

"It was fantastic camp and the girls had so much energy and we had an awesome range of guest speakers, all of whom reiterated the message about the huge range of careers available in the industry.

"They also mentioned about the importance of networking and it is not what you know but who you know, and to encourage them to put themselves out there in the future.

"All the guest speakers who came to us did their spiel and then took their professional hats off and gave out cellphone numbers and said call them if they wanted to talk through anything.

"It was so cool to see so much support for getting young people into the industry." 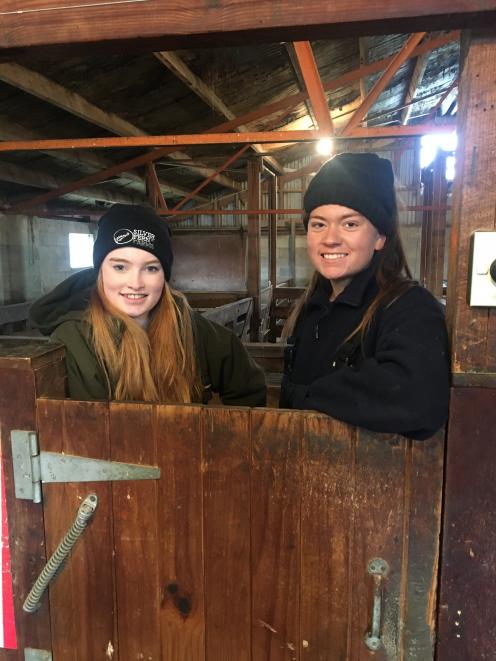 Katie comes from a sheep and beef farm near Roxburgh and was interested in careers in agri-science.

"What amazed me most were all the opportunities available that don’t get talked about too much.

"On the first day we did quite a lot of critical thinking.

"What was amazing was the Silver Fern Farms’ processing plant, which was incredible.

"There were robotics, which made the whole process more efficient and there was lots of room for people.

"It was super interesting talking to the farmers and they were pretty cool."

She was interested in the Bielskis’ regenerative farming practices as well as what Lincoln and Otago universities’ representatives had to say about the science options.

"We have learned so much and it was so interesting and so many different pathways."