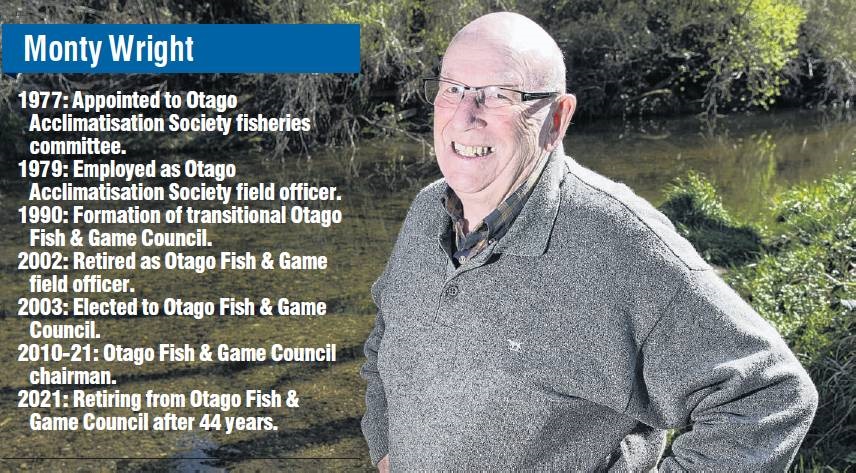 Fish & Game Council chairman Monty Wright is looking forward to doing some more fishing, following his retirement from council. PHOTO: GERARD O’BRIEN
Sleeping rough on the banks of the Taieri River for four nights to monitor spawning trout may seem extraordinary to some.

But retiring Fish and Game Council chairman Monty Wright said making sure the trout stock was not affected in the late 1970s by the new Maniototo irrigation scheme, was worth going the extra mile for.

"That’s what you need to do sometimes when you’re trying to protect something. You need to have information - you’ve got to have concrete evidence."

It was just one of many extraordinary things the 80-year-old did when he served as a staff field officer and an elected representative for 44 years.

Now, he is encouraging people to vote for representatives in this year’s Otago Fish & Game Council elections which started on Thursday.

Eligible licence holders have begun receiving their voting papers. Voting closes on October 8 and results will be announced on October 12.

Mr Wright said the next elected councillors would face more environmental challenges than ever before, including implementing recommendations from a ministerial review.

Looking back on his lengthy service, Mr Wright said his early career took a number of twists and turns before he came to Fish & Game.

He was a plasterer, tiler, stonemason, even a boner and meat grader at Burnside freezing works before getting involved in the Otago Acclimatisation Society - the forerunner of Otago Fish & Game.

In 1977, Mr Wright was elected to the acclimatisation society. His father, Stan, was chairman at the time.

Having fished and hunted since he was a boy, his voluntary service in the society became a turning point, and in 1979 he began a 24-year career as a Fish & Game field officer.

Mr Wright has a deep knowledge of Otago waters, gained from decades of fishing.

An expert angler, he was a member of the New Zealand fly fishing team which won the world championships in 1991.

In 2002, he retired as a field officer and the following year, stood successfully in the Otago Fish & Game Council elections.

He has served continuously on the council since then, including three terms as chairman.

"I feel a bit sad about retiring because I’ve been involved with it for such a long time. But it’s time for some new people to take on the challenge."

Also retiring this term are long-serving councillors and former chairmen Dan Rae, of Bannockburn, and John Barlow, of Wanaka.