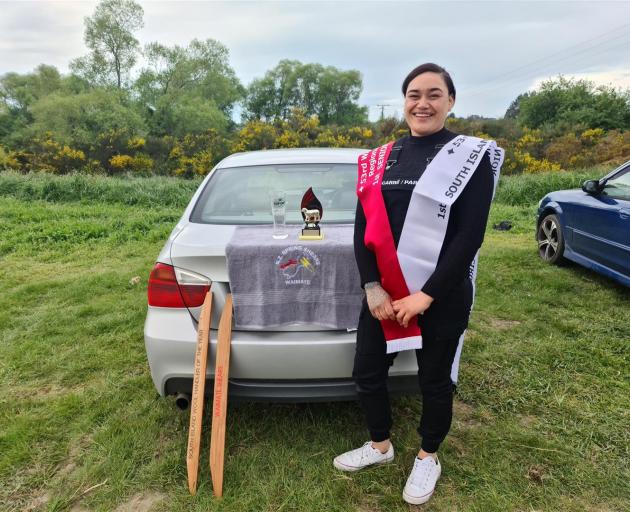 Amber Poihipi was thrilled when she won both the New Zealand Spring Championships and South Island Circuit senior woolhandling finals at Waimate recently. PHOTO: SUPPLIED
Amber Poihipi is passionate about the wool industry and wool handling.

That passion contributed to her success when she won both the New Zealand Spring Championship and South Island Circuit senior woolhandling finals at Waimate.

Based in Winton, Ms Poihipi has been working for Shear Tech Ltd owners Ray Te Whata and Matt Watson for about a year.

She has been in the industry full-time for 14 years, and has worked throughout New Zealand and also spent six years in Australia, as well as several months in the United States, grading wool in a mobile woolshed.

"It was very different working out there in a trailer, and we graded into short, long, strong and coloured wools and we didn’t skirt," she said.

She grew up in Ohai where there was a strong shearing community in the 1980s and 1990s.

"My grandfather was a well-known shearer in Ohai, Kuki Poihipi. I started working in sheds in the school holidays for extra money and I just kept going back."

She likes working in the industry as she constantly meets old friends and new people.

"I love it and I love the lifestyle."

That was not always the plan as she graduated with a international flight attendant and a travel, tourism and business qualification.

"However, I realised halfway through my studies that it was not what I wanted to do. I still graduated but it was just not for me.

"Every now and then I think about it but I know now, with what’s going on in that industry, that I made the right decision."

In addition to her success in Waimate, Ms Poihipi also won the senior woolhandling section at the Golden Shears in March as well as at the Gore show.

She was delighted as this year is the first time she competed as a senior, but now with four wins to her credit, she will move on to the open section.

"That is a little bit scary and but I want to see how I go. It is also exciting competing against all the ones I have looked up to for so many years.

"It is a bit of an adrenaline rush and you are testing yourself to see what you are capable of. You are bettering yourself every time you compete."

While she is not considering shearing or woolclassing at this stage, it is something she might look at in the future.

"I am quite happy woolhandling.

"The people are really cool and they have passion. I would encourage anyone wanting to compete to believe in yourself and have the confidence to give it a go."