By Sally Rae
0 Comments
In the wake of a University of Otago study on the impact of the Mycoplasma bovis outbreak on Southern families  - with a dominant theme of  the "intrusive, impractical and inhumane" nature of the Ministry for Primary Industries’ eradication programme - business and rural editor Sally Rae tells the story of a North Otago family caught up in it.
Rob Borst will never forget the scene that greeted him when he turned up at his North Otago dairy shed 15 minutes too late.
With Mycoplasma bovis declared on Mr Borst’s large-scale dairy farming operation in 2018, he had cows with mastitis - one of the symptoms of the disease - that the Ministry for Primary Industries ruled could not be sent to the meat works.

The cows were not unsound and Mr Borst felt they could still be killed at the works, but MPI decided they should be killed on-farm, despite his concerns.

Many of his staff had been with him a long time and had personal connections with the herd. Concerned about the effect on them, Mr Borst intended ensuring they were away when it happened.

He was supposed to meet a representative from a pet food business at the shed, but he turned up 15 minutes early and Mr Borst was out on the farm. He arrived to find 10 cows had been shot, their throats cut and his staff crying.

"I just said to the guy, ‘You can’t do this. This is just heartless’.

"There was hysteria. The rest of the cows got upset. The staff were beside themselves. And then we had to deal with the repercussions of the blocked up effluent systems because all the blood coagulated.

"I rang MPI and said, ‘Look no more, that’s got to stop’. He was told MPI had the option of bringing police in to enforce it.

"So I basically said, ‘... if you’re going to go down that track, there’ll be cameras there to show what’s going on here.’ And I finally got them to back off." 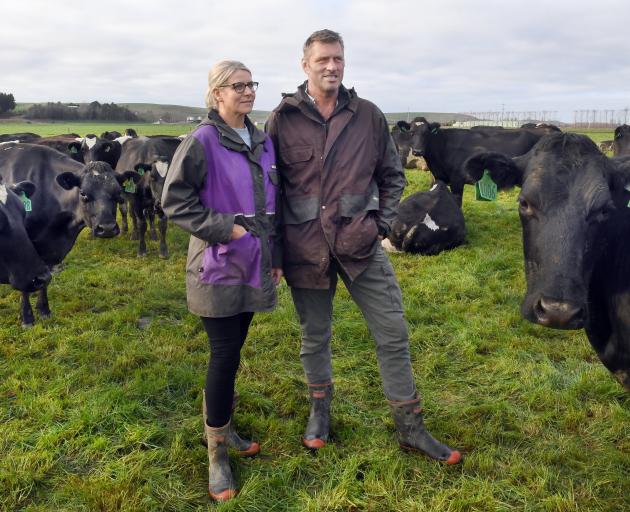 Five Forks farmers Rob and Sylvia Borst say there are some positives to have come out of their experience with the Mycoplasma bovis response but they hope never again to go through something similar. Photo: Stephen Jaquiery
That, Mr Borst, acknowledges was probably the lowest point in his dealings with the disease and MPI. It was also when he phoned then response head Geoff Gwyn and told him they would not continue with the cull.

He and his wife Sylvia then started to "finally get a bit of understanding".

"He [Gwyn] brought down three other quite senior people in MPI. And it was my opportunity to ... lay it out to them.

"They probably didn’t realise what it’s really like, down on the face. The coal face of dealing with this. These are guys that sit in Wellington, quite high up in MPI, and I made it as real as I could."

One MPI staffer he felt was "quite arrogant about the situation" when sitting in their home.

"He didn’t even think he should be down here, talking or listening to a farmer.

"I pointed out we were fighting for our whole livelihood, because farming is a career. I wanted to be a farmer when I was in primary school. I never faltered and I’ll be a farmer for the rest of my life."

"The other thing [is] it’s our home. We live on the farm. It’s not like we turn off at five o’clock and jump in the car and head home. We live it, 24 hours a day and I don’t think they understood that. So we were fighting for our home as well."

After that conversation, Mr Borst said the process got "a lot better and a lot clearer" and he felt there was much improved understanding and respect, from both sides, about finding a way forward.

MR and Mrs Borst’s first exposure to the disease was in April 2018 when they had more than 800 in-calf heifers grazing on a Central Otago property which was placed under a notice of direction (NOD).

The risk of their heifers contracting M. bovis was deemed by MPI - which discussed options with the couple - to be extremely low, the NOD was lifted and the heifers returned to North Otago. The Borsts thought that was the end of it.

"In hindsight now, if I was put in the same scenario again, I would say, "Look don’t risk it". But it’s always easy to look after the fact and say with all the information and knowledge I’ve got now ... and the implications of making a wrong call, hindsight’s always great."

It was about the first week of September that year - during the first round of national milk testing - that Mr Borst got a phone call to say two of his four properties had tested positive for M. bovis and a third was suspected. The following day, MPI said an emergency meeting was needed.

Feeling sympathy for those already caught in it, he never thought he would be in that same scenario. Getting drawn in, in such an abrupt way, was an emotional roller-coaster.

"This was in the middle of calving, the busiest time of year, [I was ] probably overworked, quite stressed, then having to deal with that, it took a lot to take in for starters," he said.

He went through various phases; initially shock, then panic - wondering how their business would survive - then trying to get an understanding of what was going on, because things were happening beyond his control, and finally, putting a date on when they would get to the end point and get back operating where they needed to be.

"Once I got to that phase, I think I probably became more pragmatic about things. I was more accepting of what needed to happen and then probably focused on trying to make things happen to get us to that point. But it was a difficult period to go through all those phases."

They got their vet, Kevin Kearney, from Oamaru’s Veterinary Centre, on board. He attended many of the 30-odd meetings the Borsts had on farm with MPI. He was a "god-saver" and helped them to challenge MPI at times "because MPI were making some very poor decisions at that stage".

During those early meetings, some of the people MPI had fronting them were "probably out of their depth" and he did not think there was clear enough direction from "higher up" about the process.

"I think they [MPI] were terribly poor at the beginning, shockingly poor actually to be fair ... they were disorganised, they were ill-prepared and they were terrible at working with farmers."

But Mr Borst acknowledged the ministry got much better very quickly.

Talking to other farmers who went through M. bovis, it seems the hardest part was uncertainty. The Borsts were fortunate - "whether you look at it as fortunate enough or not" - they knew within about the first week they definitely had it.

The farms were in full lockdown and they had a directive to cull within about two weeks.

Others had been caught up in "no-man’s land", not knowing whether their cows were going to be culled.

Still, when it dawned on him he was looking at losing 5000 head of dairy stock, Mr Borst acknowledged it was "pretty tough for the whole team".

There was also a lot of history in their breeding so the loss of that was also emotional; when he shifted from Taranaki to North Otago to go sharemilking in 1992, a portion of the herd was made up of his father’s in-calf heifers.

One of the toughest things he had to do was ring his 23 neighbours to tell them he had been caught up in the outbreak. As far as public perception went, he said the couple felt, at times, as if they were being judged.

Their cow cull was due to begin on January 4, 2019, but shortly before Christmas 2018, their young daughter Juliet fell off the coffee table and was badly concussed.

While in hospital, scans showed she had a tumour in her pineal gland in the middle of her brain.

The Borsts were preparing for the cull, two trucks loaded a day, six days a week, for five weeks. Along with loading stock, Mrs Borst would scan all the animals as they were loaded out and match those EID tags with their herd records and forward that information, with other documents, daily to MPI.

Now, they were also dealing with their ill daughter and a whole lot of uncertainties.

It also provided some perspective, refocusing on "what is real".

"We probably would have been more affected by the cow kill had we not been dealing with Juliet, I think.

"It just reprioritised our thinking," he said.

PART-WAY through the process, Mr Borst had realised the effect of the outbreak on staff who were under a huge amount of stress, which he initially under-estimated. That was something he probably picked up later than he should have, he said.

He was also incredibly grateful for the support of his wife, who was "there every day" and the pair drew on each other to get through it. "It was a team effort, we both had to guts it out."

When it came to the cleanup of the property, Mr Borst said he had to step back from it.

"My make-up is I hate people being slack and I looked at their process and I just shook my head, and then someone told me, ‘Look, that’s not costing you anything, just walk away.’

"There would be a van-load of people arriving in these white suits and they’ll be scrubbing everything, pulling everything apart, and it looked ridiculous some of the things they were doing, but I was no good trying to challenge that. I had other battles I had to deal with and so I just left them to it. They were here for months on end. It was just about comical, really."

But Mr Borst acknowledged a good job was done.

"I can’t question the end job.

"Everything was ticked off ... there were a few small things but, for what they did, it went remarkably well, to be fair."

Fast forward to now and their farms were restocked and "humming" and, financially, they were no worse off.

"We had a good result in the end, but it took a fair bit to get there ... a lot of unnecessary stress."

The couple still felt for those farmers who went before them in the process, who did it "even tougher" and were more stigmatised.

When it came to reflecting on the experience, Mr Borst described himself as always looking forward; he did not tend to dwell on what happened in the past.

"I look at it as something’s happened in my farming life and I hope I never have that experience again ... I just look at it as just an experience and it was tough, but we got through it. We’re out the other side and we’re looking forward."

As for MPI, he believed the ministry was a lot better for it - "not that you ever want to go through it again but, if we had another something terrible to go through, I think they are certainly much better prepared for it, going down the track."

And for himself, Mr Borst said he had come out stronger from the process and felt he was better prepared to deal with something else if it ever came along.

"So there has been some positives come out of it as well, even though I suppose it certainly wasn’t a process that I would ever want to go through again."