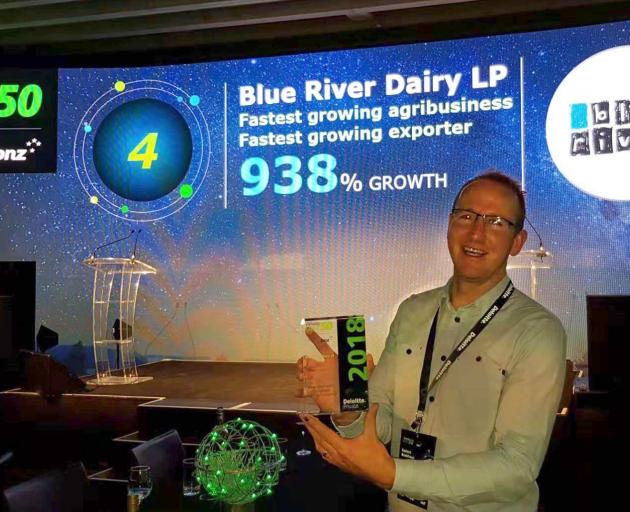 Blue River Dairy general manager Robert Boekhout accepts the Deloitte Fast 50 award for being New Zealand's Fastest Growing Exporter, in Auckland on Wednesday. Photo: Supplied
Invercargill's Blue River Dairy appears set to cement its place in the Deloitte Fast 50 index for some time yet, given it expects to double its exports next year - to 15 million cans of infant milk powder.

Blue River makes infant formula from the milk of cows, goats and sheep, with no mixing of the proteins between species.

"We've used this demand and a global shift to alternative protein to significantly grow our business," he said.

A new $15 million canning line capable of meeting the 15 million can forecast was on schedule to be opened after mid-2019. Staff numbers have more than doubled in the past 18 months, reaching 110, and there will be 30 more jobs coming between now and opening of the canning plant.

Having been 10th on the Fast 50 last year and coming in fourth this year, Mr Boekhout was hopeful the doubling of production would edge the company further up the top-five list.

He said Blue River was "changing the face" of New Zealand dairy with its production of cow, goat, and sheep milk nutritional formulas.

"We recognised opportunities in the nutrition market across cow, goat and sheep infant formulas and rapidly geared up our production to meet the needs of our customers who demand the highest quality products."

The award recognised the innovative team culture at the Invercargill plant, as well as the vision and unwavering belief of chairman and group chief executive Yuanrong Chen, Mr Boekhout said.

Blue River, founded by Southland businessman Keith Neylon in 2003, was sold to Chinese company Blueriver (HK) Nutrition Co Ltd in February 2015 for an undisclosed sum, but was tagged for development spending of up to $40 million.

"We're proud of our success so far but we also recognise that we have a long way to go.

"It's a competitive market and we will continue to differentiate ourselves by developing new products and categories for our customers," Mr Boekhout said.