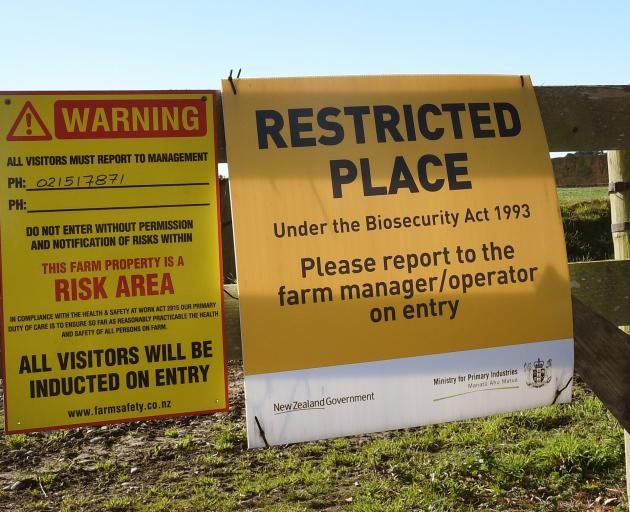 Photo: ODT files
The costs of Mycoplasma bovis to the agricultural sector continue to stack up.

The Ministry for Primary Industries (MPI) says the eradication programme has cost more than $203million to date - excluding compensation to farmers.

In that respect MPI has received a total of 1450 claims with a value of $109.9million and has so far completed 1100 of those, cutting cheques to farmers valued at about $96.5million.

According to the latest figures from MPI more than 116,526 cattle and cows have been culled in just over two years since the M. bovis eradication programme was launched.

That's getting close to initial estimates that around 126,000 animals would be culled during the course of a multi-year surveillance and eradication strategy, or around 1% of New Zealand's cattle population.

While the ultimate cost of dealing with the disease was high - estimated at about $1billion - the cull itself was not significant in the context of an annual kill of more than four million cows, calves, steers, heifers and bulls, Meat Industry Association (MIA) chief executive Tim Ritchie said.

Last year the M. bovis eradication programme pushed the year-on-year overall cow cull during the second quarter, traditionally the dairy industry's peak cull period, up from 470,000 to more than 537,000 cows.

Those numbers could be as high again this year, according to the MIA.

Mr Ritchie said the majority of stock under the MPI eradication programme were going to meat processors and were being processed as normal, with "smaller batches" for testing purposes.

"MPI is dealing directly with the meat processors on a commercial basis for the cull, though we provide an element of hygiene, for example with transport to ensure that livestock trucks that have transported cattle from infected farms are washed and cleaned."

Mr Ritchie said depopulation of herds where M. bovis was detected was only expected to have a nominal impact on New Zealand beef production.

"It also doesn't affect the safety or quality of New Zealand meat products, either locally or for our export markets.

"It is present in other countries, but we are seeking eradication because of its potential impacts on farm production, animal health and also the relatively low infection rates."

While those rates had been relatively stable, there were still 292 properties under "notice of direction", which restricted the movement of animals and goods off farm and 641 properties under "active surveillance", where actual testing for M. bovis had begun.

Twenty-one of the 193 properties confirmed as having had the disease still remained on the active list, of which the majority, 148, were in the South Island.

"Ultimately, it's in all our interests to ensure that the disease is under control," Mr Ritchie said.