'M. bovis' hurts all down the chain 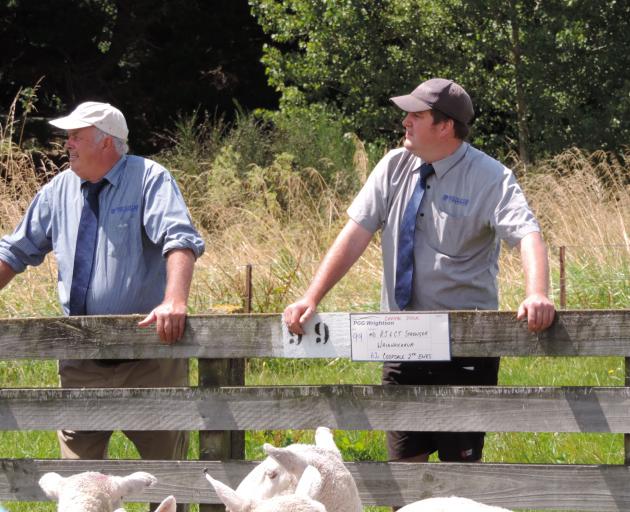 John (left) and Mark Cheesman, from Whitestone Livestock Ltd, are caught up in the Mycoplasma bovis outbreak. Photo: Sally Brooker
Mycoplasma bovis is affecting people all along the cattle supply chain.

M. bovis was identified for the first time in New Zealand in late July on farms near Glenavy owned by the Van Leeuwen Dairy Group.

''It's not really affecting the Waiareka saleyards as much as farmers' and everybody else's confidence to buy animals from this district and any other district,'' Mr Cheesman said.

''We're finding in a lot of cases where we're trying to transact animals, particularly in situations where they have in the past been traded with the North Island, people are walking from opportunities presented to us that in the past they would have purchased.

He was concerned for farmers who had traded stock in good faith and were now stymied by Ministry for Primary Industries biosecurity controls. He understood some farms had to retain all their livestock because it was not allowed to be moved.

''It gives those guys very little room to jiggle.''

Whitestone Livestock clients who had bought cattle from properties that later turned out to be infected had been put under movement control in December, but in February their animals had still not been tested.

Mr Cheesman believed the testing regime was ''under a lot of pressure''.

''This disease was found in July. Every service bull that went out in October, November and December - none were tested.

''MPI missed the boat in that regard.

''Recent weaner bull sales have seen huge numbers of stock sold, with absolutely no testing and no way of knowing if they were infected. They've gone right through the country.''

Mr Cheesman was appalled that farmers with infected stock were being ''treated as lepers''.

''Perfectly innocent parties are being impacted and tested.

Mr Cheesman predicted the service bull situation next year would be ''a nightmare''. Many farmers would not accept that testing could be trusted.

M. bovis was having ''a hell of an impact on the morale of those affected'', he said. Not only were people worrying about animal health and their financial positions, but some were also feeling guilty about unwittingly spreading the disease.

''We sold cattle from infected properties to third parties. We didn't know that was the case until July.''

Mr Cheesman thought eradication was unlikely now, and that managing the disease was the long-term project.

''It's probably not a hell of a lot worse that Johnes or BVD.

''No doubt at some time a simple test will be available to farmers that will be similar to the Tb or BVD test. The sooner that becomes a reality the better.''

From the Ministry for Primary Industries’ 60th update on Mycoplasma bovis, sent out on March 2:

All infected properties are under quarantine controls set out in restricted  place  notices under the Biosecurity Act. These legal controls restrict the movement of stock and equipment on and off those farms to contain the disease.

*Four separate farm blocks (owned by one farmer in Southland) have been amalgamated into a single IP for management purposes.

In addition properties have been depopulated and cleaned and their legal restrictions have been lifted. They are no longer IPs.

MPI is especially interested to hear from people who have received cattle or calves from Southland-based Southern Centre Dairies Limited at any time after January 1 2016 and have not already been contacted by the ministry.

In addition it needs to hear from farmers who have used milk from Southern Centre Dairies  Ltd for calf feed since January 2016.

Owners of Southern Centre Dairies and other infected properties have been supportive of the response activity happening on their farms. This is a  tough time for them and MPI thanks them for their ongoing co-operation and encourages their community to continue to rally around them and give them support.

MPI needs to hear from any farmers [not already contacted] who have bought cows and calves or milk for calf feed from farms that have been publicly identified as infected.