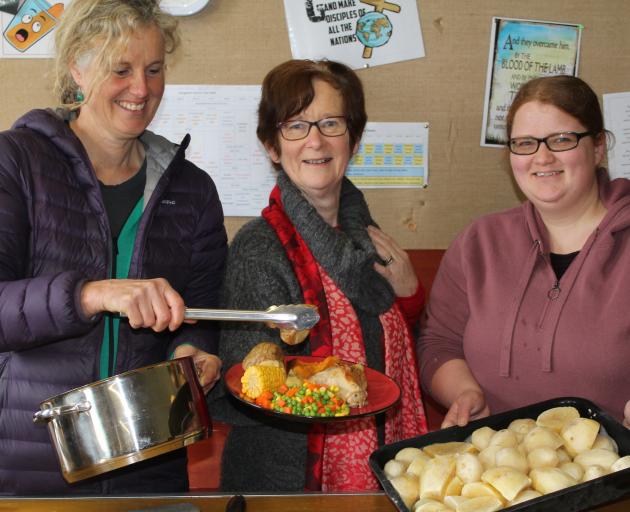 The Hub free meals team (from left) Pip Gardyne, Heather Gullick and Sarah Cowan dish up a hot meal for migrant farm workers. Photo: Margaret Phillips
A reluctance to visit dairy farms in order to reduce the risk of spreading Mycoplasma bovis has dealt a blow to a service dishing up free meals for migrant workers.

Volunteers normally visited 10 to 20 farms each week to invite mostly migrant workers to the community meals put on in Riversdale during the busy lambing and calving season.

Organised by the Riversdale-Waikaia Presbyterian Church, the free weekly meals have in past years attracted about 80 people at the seasonal peak.

Volunteers this year had not carried out a round of visiting to pass on invitations, fearing they could spread Mycoplasma bovis from farm to farm, he said.

The participant numbers had dropped to the mid 40s and last week fell even further to the early 20s.

Swiss, Germans, Filipinos, Sri Lankans and South Africans were among those attending the dinners.

While there was no Government directive that prohibited people travelling from dairy farm to dairy farm, volunteers were hesitant to visit, not wanting to risk spreading the disease.

Not only did the meal provide nourishment to farm workers at the height of their busy season but it was also a good place to meet other people, Mr Gullick said.

The meals had been an annual fixture at The Hub in Riversdale for 13 years.

Federated Farmers Southland vice-president Bernadette Hunt said it was a shame migrant workers were unaware of the meals.

Mrs Hunt said if volunteers wanted to visit farms they could contact the farms by telephone first.

''Most farms have instructions at the gate.''

Mrs Hunt could understand the volunteers' reluctance in visiting farms as there was a ''lot of fear'' relating to the disease.

However, the information posted at farmers' gates often contained a telephone number for the owner.

''The vast majority [of dairy farms] have a separate track from the road to the dairy shed that hasn't had cattle on it,'' she said.

''It's not a great practice to drive into a farmer's dairy shed, because it's not safe. There are so many hazards on farms.''