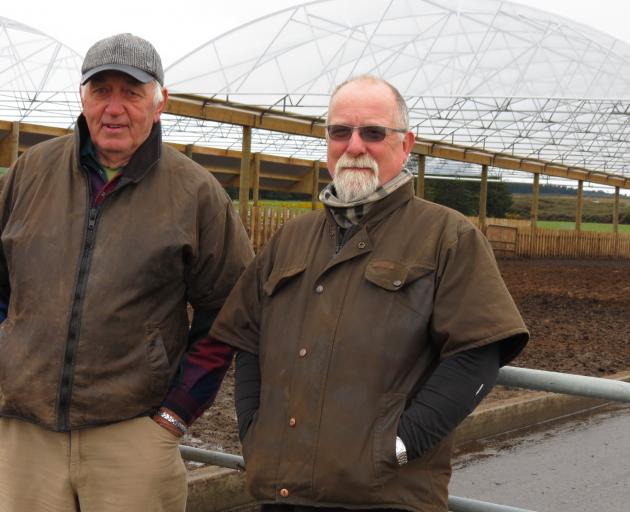 Waikite property owners Brian Webster (left) and farm manager Stuart Browning, have turned their farm into a full time dairy grazing operation and they run more than 1000 head of stock. Photo: Yvonne O'Hara
Since changing their farming practice to growing all grass year round for full-time dairy grazing, running more than 1000 head of stock was a "doddle'', farm manager Stuart Browning said.

He and wife Kim work for Brian and Glennis Webster, of the Coromandel Peninsula, who bought the 370ha (300ha effective) "Waikite'' property next to Waituna Lagoon 11 years ago.

Since the Websters and Mr Browning changed the farming system, they have gone from about 600 stock on crop and grass, to grass only and running nearly twice that number while reducing their workload and making significant feed savings.

They grow about 1million kg of dry matter annually for silage to feed the more than 1000 head of cattle and calves they graze for about eight clients each year and have about 99% utilisation.

"We have doubled the stock numbers with less work and we are growing more grass than ever,'' Mr Browning said. 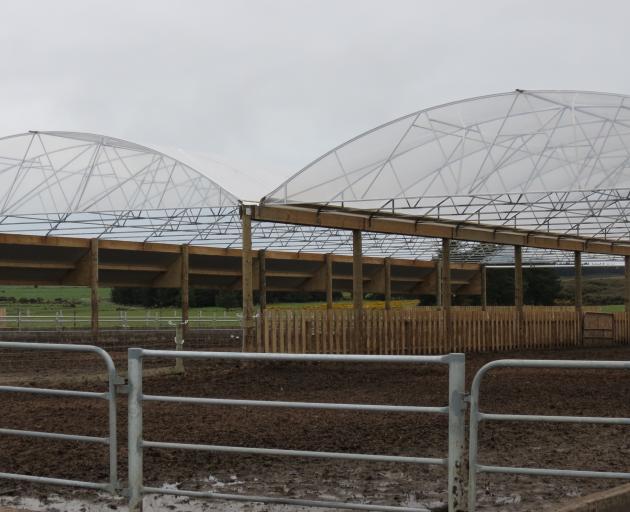 The large sheltered feedpad is a key element for the success of the Waikite property's full time dairy grazing operation near Waituna Lagoon. Photo: Yvonne O'Hara
They built a large feedpad with two plastic overhead shelters in 2015, as part of their wintering plan, and intend to add another pad before the next winter.

"The feed pad drives the business,'' he said.

"When I say that it is a doddle, all our calves go on the feedpad.

"This last winter we had them fed in an hour so that is when it is a doddle.

"We keep trying to improve what we have got rather than developing more land.''

He and a permanent part-time employee run the farm but bring in contractors when required.

They focus on growing grass with a limited amount of crop to meet autumn feed demands.

"We mow for silage twice, with the first cut of 110ha in November and the second cut of 80ha to 90ha in January.''

The silage bunkers by the feedpad contain about 400,000kgDM each and they use "Secure Covers'', to cover it, rather than tyres.

Mr Webster said they had heifers on the pad during May, and when they left for winter grazing, they put the calves for 110 days.

The calves gained about 600gm a day on the pad.

They keep the calves from different clients separate using panels, because of Micoplasma bovis

Mr Browning said they worked out their nutrient budget several years ago under the old system, and more recently did it again when they started using the feed pad and found little difference in nutrient losses.

They have a 150-day, 7.5m litre effluent pond, and also divert rainwater away from the feedpad roofs.

To empty the pond they irrigate the 50ha they use for growing silage and return the nutrients to the soil, with very little loss.

Used woodchips from the feed pad are spread on the paddocks.

The farming team was nominated for the 24th Environment Southland Community Awards' Environmental Leadership in Farming and Land Management section, which were held last week in Invercargill, and was "commended''.

The property is next to Waituna Lagoon, so environmental practices are a key element of their farming operation and the over-arching rules and regulations influence their planning to some degree.

Since then they have added extensive shelter belts and riparian planting along the other waterways, removed most of the gorse, fenced off most of the waterways and wetlands, shut up 50ha of regenerating native bush and wetlands, and have further projects planned.

Mr Browning said they had worked with Environment Southland, in planting and possum culling.

Living Waters is to assist with some riparian planting and will continue to maintain that area for them for three years.

In addition, a trial is under way looking at the use of a parasitic wasp to control ragwort.