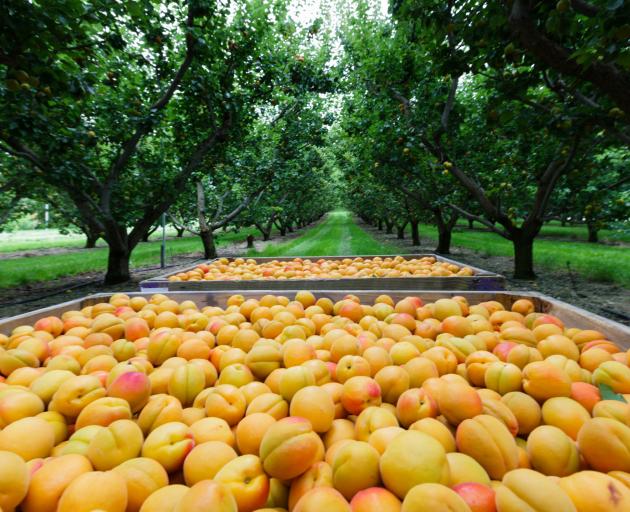 Apricots harvested on an Alexandra orchard. PGW’s horticulture supply business Fruitfed was a strong performer for them in the six months to December 2019. PHOTO: SUPPLIED
PGG Wrightson’s horticulture supply business Fruitfed contributed strongly towards a $5 million revenue surge in the retail and water division to $384.2 million for the six months to December 2019.

Stephen Guerin
The division accounts for around 80% of group revenues, which for the first half, came in at $474 million.

Profit from continuing operations, net of income tax, was $12.8 million, well ahead of the comparable $9 million for December 2018.

The smaller of the two divisions, agency (comprising livestock, wool and real estate) also reflected strong trading with pre-tax earnings at $1.9 million on the back of positive farming conditions, a mild spring and high commodity pricing across sheep and beef, driven by strong demand from China.

This had been reflected in reduced activity in the real estate business, though the division had maintained its market position.

Mr Guerin said the Go livestock programme had seen positive growth; the millionth lamb was sold under it in December.

Go livestock and Go beef programmes had accounted for about $38.6 million of spending during the first half of the year of a total capex bill of $59 million.

The wool business had also done well, he said, with operating earnings up 21% despite lower crossbred wool pricing.

Mr Guerin said the water business had continued to face challenges; however, given the lack of new on-farm development, servicing had picked up over the past six months.

Overall revenues for the business were back $7.1 million, or around a third, he said.

"Given that around 85% of the company’s retail and water earnings were generated during the first half of the year, we are conservatively forecasting net profit for the current year to be around $30 million, though the impact on the business from the Covid-19 outbreak remained uncertain.

"Yarding sales are down and meat companies are reporting that the supply chain is full, though that is apparently starting to move now," he said.

The company declared an interim division of 9c a share.