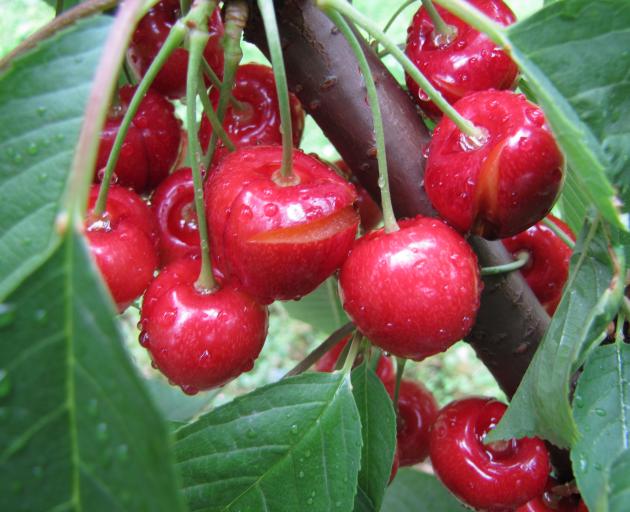 Estimates sit at about 60% on average of cherry crop lost across the region, shaving millions of dollars in value off this season’s harvest.

Other fruit was also affected by four days of torrential rain punctuated by showers throughout the week and a week on from the rain starting growers were assessing how much fruit was still salvageable.

"There’s been some huge losses, without a doubt."

He estimated on some blocks he had lost 80% of his cherry crop but on others losses were closer to 20%.

It depended on how much water was expelled from the trees into the fruit — too much caused it to split — but a tree that was heavily laden with fruit could buffer the effects, he said.

He had "covered bases" in terms of his business by offering pick-your-own cherries and mail orders, as well as his export crops.

Harry Roberts, of Roberts’ Orchard, near Alexandra, said his family business was "just as in the gun as everyone else" following the rain.

"When you get that volume of rain it makes it bloody hard work and ruins some very good product that could be going overseas."

The effects went beyond the growers and would affect the New Zealand economy at large, including workers and he was doing his best to keep them in work.

"We’ve got workers here that were relying on this [work] to get around the country.

"We’re still working, we’re still trying to salvage as much as we can."

Other crops, such as peaches, nectarines, and apricots, had weathered the rain better, Mr Roberts said.

"They seem to be as good as gold."

In Earnscleugh, one of hardest-hit areas, Jeremy Hiscock, of Panmure Orchards, said aside from cherries, crops had "fared better than expected".

There was still damage and the end of the season would tell the full extent of losses suffered by fruitgrowers across Central Otago.

Rain after the four-day "event" that flooded orchards in Earnscleugh had compounded the problem with cherries.

Compared to the rain on January 1 to 4, which was region-wide, the subsequent showers had affected some areas of more than others, he said.

"It’s incredibly difficult. It’s too early to say just how bad it is and whether it is worth persisting."