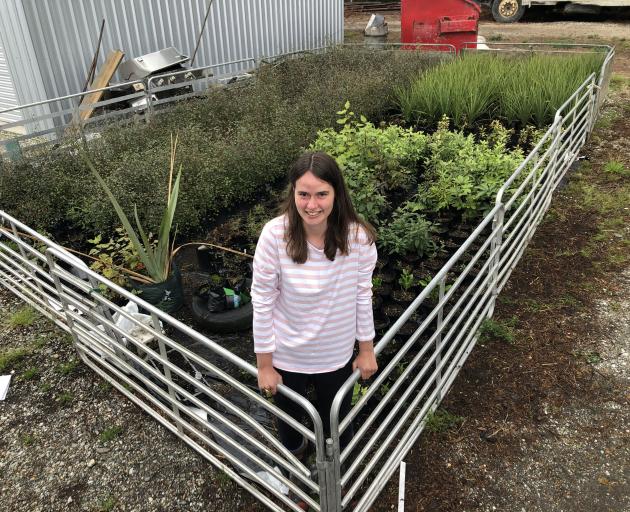 Southland woman Emily Hamill has more than 900 young native plants in her home nursery. PHOTO: SUPPLIED
Emily Hamill is making her mark as a fifth-generation member on her family farm near Gorge Road, in Southland.

The family has run Folly Farm on the scenic spot overlooking the Mataura River since 1888, when William John Hamill, Emily’s great, great grandfather, bought the property. The Folly Farm name was in reference to some in the area at the time who thought the patch of land was too rough to break in.

Generations of the Hamill family have made light of that notion ever since — her great grandfather was even named Folly Hamill.

Folly Farm covers 301ha, on which they run 830 milking cows. About 40ha of the farm is made up of native bush, wetlands and new planting areas, in slip and small gully areas.

About 18 months ago, Miss Hamill (22) noticed her father Mark was very good at identifying native plant species, and decided she wanted to match him.

She spotted ribbonwoods and other native seedlings popping up around the farm and started plucking them out, bagging them in composted lawn clippings ready for planting elsewhere.

She now has more than 900 young native plants in her impressive home nursery to plant around the farm.

She started buying bags for the natives at The Warehouse, but quickly bought the store out of stock, so now buys bags by the hundred online. She has 17 different species of native plants and trees, including black matipo, fuchsia, cabbage tree, pepper trees, wineberries, kahikatea, miro and kowhai.

"I’ve got a lot better at identifying the different types of trees," she said.

Seeing the tiny seedlings grow into small trees is satisfying, and neighbours and other farm visitors have been interested to check out her nursery.

"Its a proud moment, and it’s great to look at the trees as they grow," she said.

Folly Farm has many fuchsia trees, and one of the highlights in the past year was a kaka spending time hanging out in their trees. The family see many kereru as well. A flock of 20 gathered in the native bush for a time.

While the proximity to the coast, about 10km away, presented some challenges with salt winds, a bit of hard work and occasional weeding has ensured the survival of good numbers of the plantings.

Native species are complemented with heritage apple, pear and plum trees, including two 130-year-old pear trees, near where the original family homestead once stood.

The farm is also home to an eel-laden lagoon. Once a duck-shooting pond, the water is now a sanctuary. It has not been used for duck-shooting since World War 1 to honour the family members who never returned home.

Looking out over the paddocks, Miss Hamill said the plantings would look amazing in 20 years’ time.

She had also relocated some cabbage trees and other native plants growing under hedges.

Her mother Deborah, said it was Emily’s way of putting her mark on the farm for future generations.

"I guess most Hamills that have lived on the farm have their favourite trees they have planted," Miss Hamill said modestly.

Mr Hamill, who is chairman of the Lower Mataura Catchment Group, reckoned his daughter has planted as many trees as anyone else in the family across the five generations.

He said the fenced-off areas would have been considered a waste of land once upon a time, but are now a real asset to the property.

Ms Hamill is working on a run-off block at nearby Fortrose, looking after young stock, as part of getting some more on-farm experience.

"Well, I’ve got two older brothers, so there’s a bit of competition," she said, laughing.

Thriving Southland catchment group co-ordinator Sandra Campbell said it was fantastic to see such drive to make a positive and long-lasting impression on the environment.

"Emily is an inspiration to our catchment groups across Southland, and embodies exactly the thinking Southland needs."