Rodger Whitson has had to start throwing away perfectly good produce as the reality of being a small business owner during lockdown sinks in.

He owns Janefield Paeonies and Hydroponics, which operates from his 4ha property just outside Mosgiel, growing lettuce and herbs, as well as strawberries and paeonies when they are in season.

Usually, that fresh produce is sold at the Otago Farmers Market and to select restaurants and cafes.

‘‘We only grow half a dozen product lines and good quality. We have got a really good customer base on the farmers market, and the few restaurants and cafes we deal with keep it niche,’’ he said.

But a week into lockdown, there had been nowhere for his produce to go.

While Mr Whitson’s income may have stopped, growing had not, as it was a peak time of the year for greenhouse operations.

‘‘We have only just started throwing [the produce] out ... it comes to that point,’’ he said.

‘‘Things keep growing, but you have to keep planting. It is just the way it is.’’ 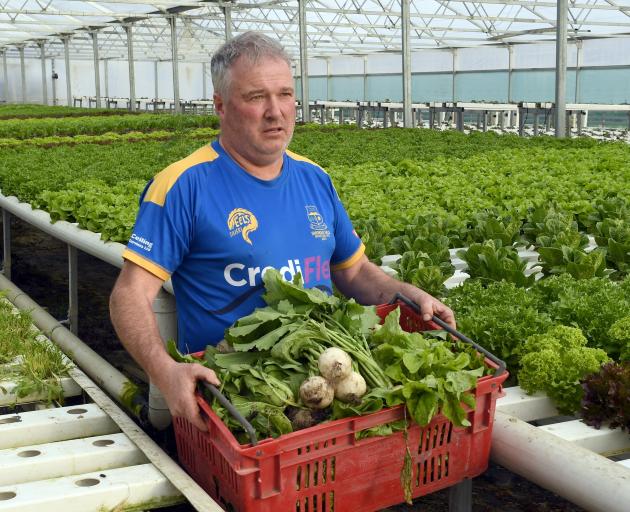 Carrying a crate full of vegetables is Janefield Paeonies and Hydroponics owner Rodger Whitson, who has no-one to sell them to as Level 4 lockdown continues. PHOTO: STEPHEN JAQUIERY
He has about 10,000 plants, with up to 2000 under cover.

Mr Whitson would usually be making anywhere from $3000 to $4000 a week at this time of the year, with the likelihood of that increasing the closer it got to summer.

‘‘Hopefully, we are not in lockdown very long,’’ he said.

While his business was eligible for the government wage subsidy, Mr Whitson said it was the unknown that proved challenging.

‘‘We are here throwing out at one end and planting at the other ... Maybe I should look for a job in the public service,’’ he said.

Saddleview Greens owner Dale Jordan said he had not had to dump any produce yet, but if the lockdown continued it was a real possibility.

As days grew longer there would be more produce to sell, but there was ‘‘not much going out the door’’.

Although Saddleview supplied supermarkets, the loss of restaurants, cafes, boarding houses and other services was a big drop off in sales.

If the lockdown did not ease by the end of next week, he would have to consider dumping produce.

For heaven's sake give this to the Sallies or a similar charity.

Absolutely! There's so many groups this could be legally given to - collected from the front gate - for essential services like meals on wheels. Such a waste otherwise.

If that is what you would like to see happen, make it happen.
1/ Identify and contact the charities
2/ quantify what they would take
3/ discuss with the producer costs of harvest and packaging
4/ agree on a price
5/ raise the required funds
6/ arrange transport and distribution
I'm sure I've missed a few steps but you now have a starting point.
Simply expecting him to add to his losses by fulfilling your worthy intentions is NOT REALISTIC