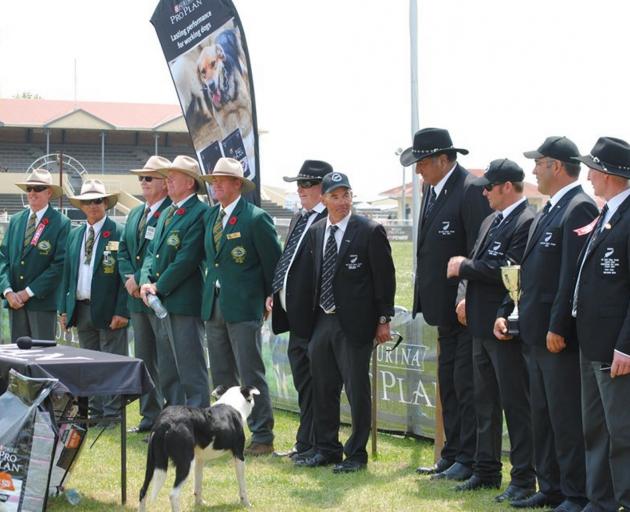 The Banks Peninsula farmer led his country to a second successive Wayleggo Cup triumph over Australia at the 125th annual Nelson A&P Show on November 23 and 24.

‘‘It’s a great event and it brings out the best in people. It’s always good to represent your country and it’s an honour to be the captain.’’

He had a very successful season with his dog Girl, winning the national long head title and placing sixth overall in the yarding at the New Zealand sheep dog trials championships earlier this year.

Qualification for the national side is based on performances at the North Island and South Island competitions and the national championships.

It was Mr Clark’s fifth time in the national team and second as captain.

He was joined by three North Islanders, father and son duo Neville and Stuart Child and Guy Peacock.

The team had one training run at Hunterville, before assembling in Nelson on November 20 for the annual test series.

After a warm-up the following day, the New Zealand and Australian dog triallists competed in the local club competition on November 22, before the two tests on November 23 and 24.

Stuart Child, who was in the national team for the first time, had a successful debut, winning the club trials.

The New Zealand team had a big win in the first test, after one of the Australians failed to get the sheep past the first head and pull, and didn’t register a score.

‘‘I actually felt a bit sorry for him, because he came all the way from Tasmania and to not register a score.

‘‘He tried for 15 minutes to get them on track, but the dog just couldn’t get the sheep to play ball — but that’s dog trials.’’

Sunday’s second test was much closer, with Australia coming out on top, but New Zealand won on aggregate.

Guy Peacock and his dog Chief were the last New Zealanders to compete on the second day.

‘‘I said to Guy, ‘you just make sure you finish, don’t worry about the points’.’’

Mr Clark said he was looking forward to having a break, before the next Tux New Zealand event in Blenheim in late January.

Next year’s Wayleggo Cup test series would be held in Tasmania and Australia would be looking for its first win since 2013.

‘‘I’m keen to go to Tasmania and have a look. We have a few drinks with the Aussies, stay in the same motel and do battle for a couple of hours each day.’’

Mr Clark is a painter by trade and leases a 445ha farm on Banks Peninsula, running 1000 ewes plus beef cattle.