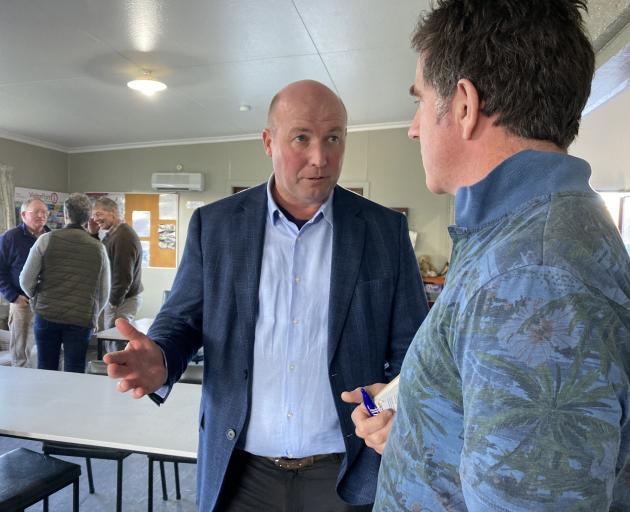 National Party spokesman for agriculture and horticulture David Bennett speaks with a farmer at a meeting in Omakau earlier this week. PHOTO: MARY-JO TOHILL
Central Otago farmers are calling for National Party politicians to pay more than lip service to their ‘‘Back our farmers’’ slogan.

National MP Jacqui Dean and the party’s spokesman for Agriculture and Horticulture David Bennett took a drubbing at a farmers’ meeting held at Omakau on Thursday to back up their support with actions, not just words.

It was not tea and sympathy the small number of attendees wanted. It was answers, and what the National Party intended to do about the rules, regulations and taxes that the rural sector believed were too onerous and unworkable.

Also the Hamilton East MP, Mr Bennett’s opening volley was to criticise the handling of water issues at the Otago Regional Council level, pledging that the National Party would work at a catchment level with farmers and the community, rather than Labour’s ‘‘top-down approach’’ that had bred division and uncertainty around water use.

Attendees demanded solutions now; they could not wait three years for a new government to come into bat for them.

Some felt that despite protests like Groundswell, they were only seen as a ‘‘whinging pack of farmers from down south’’ without a political voice, and that their messages were not getting through.

‘‘We were driving tractors because we weren’t being listened to,’’ a farmer called out from the floor.

They urged the Waitaki member Mrs Dean and Mr Bennett to tell their party to get more on board with the movement.

Mr Bennett told farmers to make sure they were heard.

‘‘We need a whole voice across the sector and this is a great example of a community fighting back because you’re vulnerable and you’re fighting for your way of life.’’

‘‘My hope is that National can be more reactionary. People are speaking up, to the point they’re tearing their hair out, but you need to stand up for us.’’

After the meeting, the organiser, Maniototo farmer and former National Party politician Gavan Herlihy, said he expected the politicians to get a drubbing.

‘‘I’m not surprised at the strong reaction from people at the meeting because of the stress people are under, which brought the searching questions and emotive expressions. It’s totally understandable’’.

Ms Dean said she had to accept that in opposition, an MP had to take it on the chin.

‘‘I think this is a community under stress, and we find ourselves impotent to do anything to help them, and that was the underlining feel of the meeting.

Goodness me!
What a petulant, spoilt, entitled bunch of whingers and whiners. Rest assured that this is not how the rest of NZ sees farmers from down south, it is how NZ see farmers across the country.
NZ remains a democracy. That means the majority rules. It doesn't matter what farmers want, farmers are a very small minority within NZ, you don't get to run the place. The majority want sustainability.
And farmers can't wait 3 years for change. So what are you proposing? Sounds very revolutionary to me. I think you'll find that National, if they want to have any hope of winning the next election they are going to have to came up with policies that the majority support, and guess what, the majority support the same water management reforms that Labour have come up with. Oh, national will tweak them a little but they won't change it.
If you dislike being seen as whingers and whiners, stop whingeing and whining and do the right thing, take responsibility for the unsustainable farming methods you've applied for generations and fix it.

Once upon a time, National MPs were often farmers and National has been seen as the 'farmers party'. That is no more. Similarly, Labour MPs were once unionists and teachers. No more. They are selected to a far higher standard and most now have doctorates - and that shows. National MPs are selected very poorly and you have seen the results in the media.
Farmers need to realise that govt policies are often dictated by international markets, Water reform is so overdue in NZ and for the long term benefit of farmers, needs to be introduced ASAP.
As far as these protests go, many like me support some of it BUT it is being driven by an underground right wing movement dangerously growing in NZ. If farmers get caught up in right wing politics, they are in future trouble.
On a daily basis I get anti-Jacinda emails that are supposed to come from some authoritative author. I can see how they are believed. But the sources are false and the author never said such a claim. The email is designed to brainwash you into believing only the right wing can save you and you are currently on a road to doom. Delete these emails and farmers, beware of what you wish for.