There was an unusual number of revellers at Beaumont Hotel on Saturday night, many of them four-legged.

The hotel’s beer garden was wall-to-wall fur, farmers and fun, as the rural pub held its inaugural bark-up, attracting a crowd of about 80 and about 40 canine entrants.

Clydevale shepherd of seven years and barmaid, German-born Jana Fransbach, conceived the idea for the event after a local dog club dining at the hotel suggested she organise one.

She liaised with the Millers Flat Collie Club — which held a training day on Saturday afternoon — and it agreed to send participants in the hotel’s direction afterwards.

The fun social event followed traditional bark-up protocol, she said, where a sheep dog — usually, but not always, a huntaway — had to bark as loudly as possible for the judges. 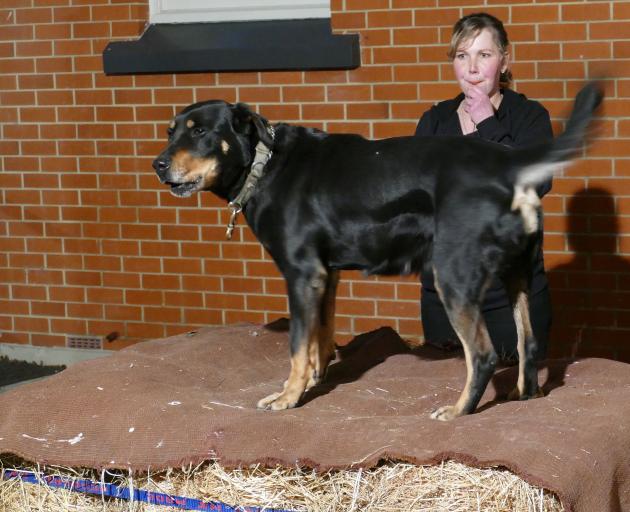 Beaumont Hotel Bark-Up organiser Jana Fransbach sets the pace during Saturday night's inaugural event, encouraging huntaway Jade to let rip. PHOTO: RICHARD DAVISON
The owners of any dogs "soaking" — failing to bark under the spotlight — would be penalised by taking their dog’s place and barking instead.

"Every shepherd can make their huntaway bark out in the paddock, but here on a bale of hay in front of a crowd is a bit different," Miss Fransbach said.

"Some dogs can get stage fright and soak. I’m going to take part with my dog Jade tonight, so I hope she doesn’t let me down and make me have to bark instead."

Everybody was welcome, city dwellers included, she said.

"We’re just starting small and keeping it simple this first time out. People from town are invited, and hopefully we’ll also have a couple of Jack Russells.

"If your dog can bark, it can take part."

"Barking up is associated with the beginning of a muster, and should send sheep on their way and set the tone for the day.

"Tonight we’ll also bring a bit of technology out too, just to see exactly what they’ve got."

Mr Burnett said he would use a smartphone decibel meter to assess barking volume, and factor that into decision-making.

"But it’s really about getting the young ones out tonight, and giving them the confidence to get their dogs out, and have some fun."

He would be watching out for "soaking".

"We have ‘measures’ in place for the owners, to counteract that."

Miss Fransbach said a portion of the $10 entry fee would be given to rural wellbeing charity Will to Live.

"It’s been a great turnout, and we’re pleased to be able to help out our chosen charity.

"I’m probably the first German ever to organise a bark-up in New Zealand, so I’m glad it’s gone so well."