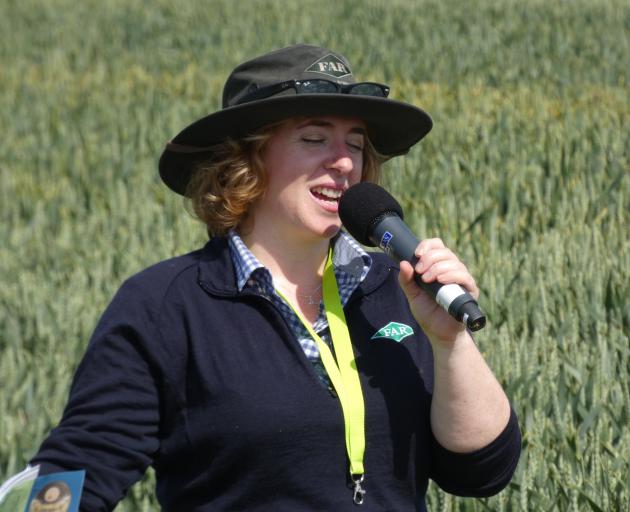 Arable farmers learned about some of the best ways to use them at the Foundation for Arable Research’s annual field day at its Chertsey site.

FAR’s biopesticide studies are part of a $27million Lighter Touch programme between many sector groups.

She said growers knew they had to build resilience in their systems because they were at risk of losing active synthetic pesticides from a lack of registrations globally and pest resistance developing in "key chemistry".

There were also issues around residues and public and consumer perceptions in their food products.

Growers needed to have a run-down list when agents came up their driveways talking about biopesticides, she said.

"As arable growers we need to think about how these fit into our systems correctly. The first of those is what is the active ingredient, how does it work, have you got any replicated trial data that you can show me? If someone says I’ve got some data on a species that’s not wheat or barley or whatever your crops is — it’s not worth looking at."

Ms Drummond said growers needed to have their "ducks in a row" about their cultivars and their disease ratings so they could consider integrating biopesticides because they behaved differently to synthetic chemistry.

"You have to know your target because we know the biopesticides in New Zealand are going to be targeted at high value horticulture and may not be active on the diseases that we need."

She said a FAR trial on options indicated the main chemical pesticides were needed at key timings and looked at the shoulder times to build the flexibility of biopesticides into the system.

Diseases such as rusts were more likely — and easier — to be controlled by biological pesticides, she said.

"So biopesticide products that have label claims for, say, countering mildew in horticulture crops, are very unlikely to control, say, Septoria tritici blotch and Ramularia leaf spot in barley. I should point out they actually belong to the same family of fungi and you have to back a step and look at the families."

There are many different strains of micro-organisms that make up biopesticides, and some work well and some don’t. Growers should always ask what strain of fungus or bacterium makes up their active ingredient when somebody tries to sell them a product, she said.

Ms Drummond was unable to reveal all the products or their ingredients in trials to growers as they were coded products which had not been released yet by manufacturers.

Other products coming on to the market for row crops were more competitive, but still slightly more expensive.

Drummond said their value could be in extending the life of chemical products as resistance increased against them.

She said growers trialling reputable products with data behind them on their own farms should share the knowledge as everybody was still learning.