Aquifer levels likely to stay low over next two years 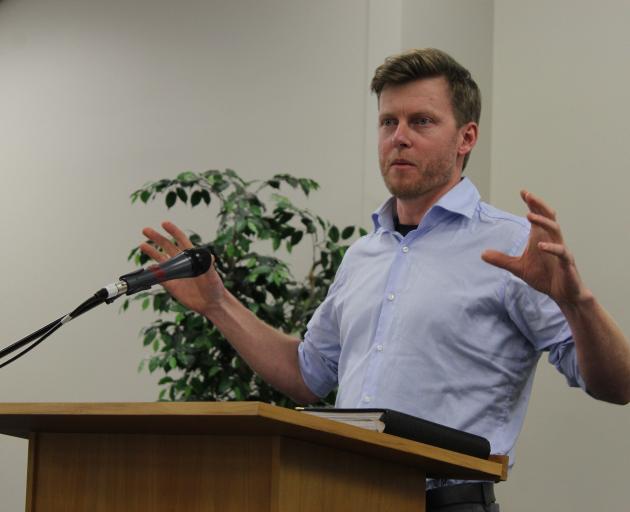 Environment Southland water resources scientist Lawrence Kees talks to members of the public about the Edendale aquifer at a meeting in the town earlier this year. Photo: SRL files
Edendale aquifer woes continue, and look set to do so for the next few years.

Environment Southland water resources scientist Lawrence Kees said while there was some response with the aquifer at the moment, in line with the usual rate of recharge, levels were still well below normal.

''The groundwater levels in the aquifer are still well below normal and likely to remain low for the next couple of years if we don't get sustained above-average rainfall.''

Following the previous record low of the aquifer in 2008, it took two to three years for it to recover.

''We've had two dry winters in a row and an extremely dry 2017 as a whole, so the Edendale aquifer has experienced its lowest levels since records began before the recharge season [June-September],'' Mr Kees said.

While July was slightly wetter than normal, both May and June were drier than average.

''The National Institute for Water and Atmospheric Research (Niwa) seasonal forecast predictions are for normal or below-normal rainfall this spring and summer. We recommend people continue to be conservative with how much water they use.''

At a public meeting earlier this year, residents aired frustrations about the continuing low levels of the aquifer.

Some residents had been left without water in the drier months and the community was eager for solutions.

The question of Fonterra's water take was raised, but Mr Kees said it was unlikely it was having any major effect.

Questions had been raised about recent developments in the Edendale area, and more large water takes.

Residents and other Southlanders could keep up to date with water levels by visiting gis.es.govt.nz/landing.aspx.