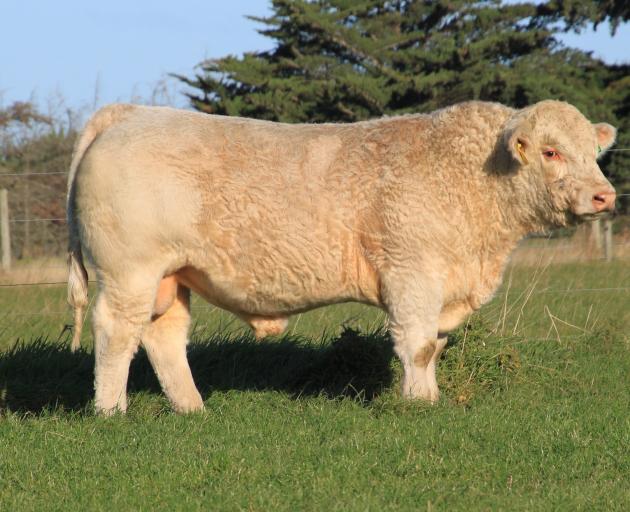 Charolais bull Silverstream Perriam P88 fetched the day’s top price at the Silverstream Charolais and Hereford bull sale last Wednesday, selling for $23,000 to Campbell Lawrence, of Eketahuna. PHOTO: SUPPLIED BY SILVERSTREAM CHAROLAIS
Mid-Canterbury’s flood relief efforts have been boosted thanks to the donation of a Charolais bull.

Banks Peninsula farmers Brent and Anna Fisher gave the proceeds of one their bulls at last Wednesday’s on-farm Silverstream Charolais and Hereford bull sale and 10,000 went to the Mid-Canterbury Rural Support Trust.

The bull’s price was just ahead of the day’s average, as 46 of the 59 Charolais bulls sold for an average price of $9122.

‘‘You always want a full clearance, but you have to be happy with that,’’ Mr Fisher said.

‘‘We were probably two to three buyers short on the Charolais. A few more buyers would have made a difference, but it is what it is.

‘‘A lot our local Canterbury buyers stayed away, which was no doubt due to the drought conditions, but we had good representation from the North Island, West Coast and other parts of the country which weren’t so affected by the drought.’’

Four Charolais bulls sold for more than $20,000, and Silverstream Perriam P88 sold for the day’s top price of $23,000, to Eketahuna farmer Campbell Lawrence.

‘‘It shows that people are still prepared to pay good money for what they want, but there wasn’t as many buyers due to the drought and with there being fewer cows in North Canterbury,’’ Mr Fisher said.

At Irwell, north of Leeston, Sudeley Genetics enjoyed a strong Angus bull sale, selling 44 of the 46 bulls on offer for an average price of $8943.

The day’s top price was $33,000, paid by Tarangower Angus Stud of Mahoenui in the King Country, and Hallmark Angus Stud of Tutira, Hawke’s Bay, paid $20,000 for an Angus bull.

‘‘It was a very good sale, considering the season. It was all good,’’ Sudeley Genetics owner Andrew Laing said.