Farmers urged to unite over water 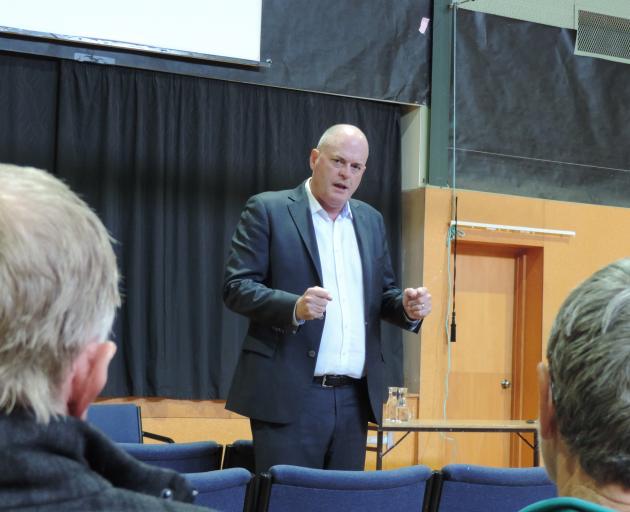 Mr Muller was accompanied by National's Waitaki MP Jacqui Dean at a series of three meetings to discuss rural issues in the electorate.

Farmers speaking out now did not fit the old image of the grumpy man with a pitchfork, Mr Muller said, and the Government had underestimated them.

Those at the recent Federated Farmers meeting in Ashburton asked forensic questions that could not be answered, he said.

''Farmers are pushing back quite powerfully. This battle is not going to go away.''

He urged farmers to band together in their fight to retain land uses and seek catchment-based water standards.

''We've got to front with some horsepower. You've got to stay collective.''

North Otago Irrigation Company chairman Matt Ross said he believed the freshwater submission process would be collaborative and articulate, but asked when objectors would get their chance to follow up - there was no select committee stage for the legislation.

''This is going to cut rural New Zealand off at the knees,'' Mr Ross said.

Mr Muller recommended asking the Ministry for the Environment, regional councils and MPs for updates.

''Engage with the new regional council that's just been elected.

''This is eye-watering for them.

''There's a lot here we can corral in terms of pressure. We need a fundamental campaign to get these guys to check and change. I'm confident there will be buckling.''

North Otago Irrigation Company chief executive Andrew Rodwell said the proposed freshwater policy could interfere with irrigation schemes that were still selling the balance of their available shares. His company had 10% unsold.

He also feared it would stifle the uptake of technology that would apply water more efficiently, allowing new land uses and environmental gains.

''New Zealand has an enormous amount of it.''

We have been constrained in storing it because, in the eyes of urban New Zealanders, that meant intensified farming, more dairying, and water problems, he said.

''If we move away from coal and gas, we need twice the amount of electricity. We need another Clyde Dam.

''This brings urban New Zealand to the table as it hasn't before.

''Jacqui and I agree. We need to develop policy.''

Farmer Alan Gibson asked whether overseas markets were at risk without major improvements to our water.

Producers of animal protein needed to give its provenance, and it had to be world-class, he said.

But he did not believe the rest of the world viewed New Zealand as polluted.

''[Environment Minister David] Parker is dressing up climate change and water in the language of catastrophe.

''It works for his policy of appealing to urban middle New Zealand.''

When North Otago farmer Marty McCone asked what a National government would do to change Labour's moves, Mr Muller said it would signal a return to its previous policy statement on freshwater - but with a caveat.

''There's a political debate to be had. It will come at some political cost.

''I think there will be quite a lot of change yet between what's been said and what happens.''