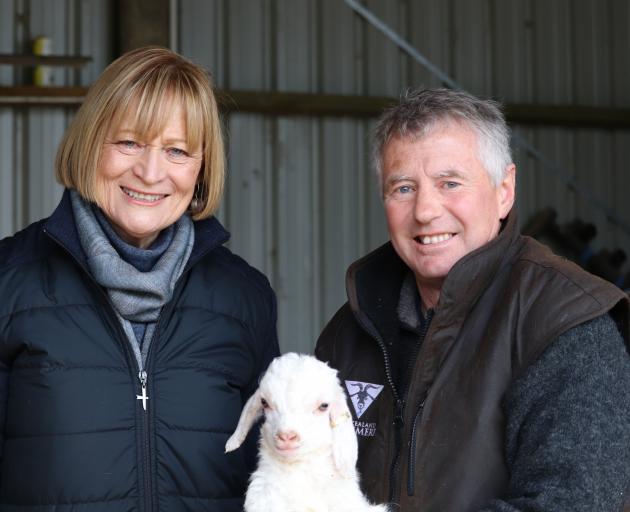 Peri Drysdale, of Untouched World, and South Otago farmer David Shaw, who have, in partnership, rejuvenated New Zealand-grown cashmere. PHOTO: SUPPLIED
I have always found the fashion industry somewhat intimidating - fabulously creative designers, models who seem to walk on air and daunting trends which only emphasise how very un-funky I am, writes Anna Campbell.

As with many industries, the sustainability of the fashion industry is increasingly being called into question.

Designers and fashion houses are rated annually by TearFund according to their "ethics'', which incorporate environmental practices and how workers are treated (often in parts of Asia where labour is cheap).

The industry is also coming under criticism for synthetic fibres hitting our oceans via washing machine waste and the fact the average garment is worn a mere seven times (if you are a British female).

Global fashion is a $US1.3trillion dollar industry, which has doubled in size over the past 15 years, according to the Ellen MacArthur Foundation's New Textiles Economy report.

One would expect the industry to continue its growth, given the increasing wealth of emerging economies in Asia and Africa - but will that growth be in the form of the business models which operate currently?

A "circular fashion industry'' is proposed as an alternative model where recycling, renting and less use of synthetic fibres become commonplace - which is how I have ended up writing a column on the fashion industry despite my intimidation.

Clearly, what goes into this industry must come out the other end and perhaps this is the time for a comeback for New Zealand natural fibres - let's hope so!

Of course, wool is one such fibre and the revitalisation of merino fine wool has been great for local producers, led by Icebreaker and Allbirds.

Late last year an innovative announcement was made by two companies, NZ Hemp and NZ Yarn, to develop new consumer products made from hemp yarn, wool and hemp yarn blends and non-woven wool and hemp products.

I thought that was pretty cool, especially given the global upsurge in demand for hemp products. Could we get any more hipster than a New Zealand grown hemp-wool combination?

Internationally there is a lot of talk about hemp products - check out US company MoonCloth which is targeting luxury hotel and fashion-ware with its hemp products. It is also combining hemp with silk for the "ultimate luxury, sustainable robe.''

Hemp is the world's strongest natural fibre but as a result of that is often seen as harsh and scratchy to wear.

New processing technology for hemp and its ability to combine with wool, silk and maybe even cashmere fibres is an intriguing proposition.

Of course in a low-carbon economy, hemp is an interesting complement to livestock farming, especially given hemp can also be used for seed and oil production or cannabinoid production, namely the non-hallucinogenic forms such as cannabidiol (CBD). However, farmers are not legally allowed to process hemp for CBD in New Zealand - yet.

Hemp has been described by some as a "super-food,'' but could it, alongside beautiful New Zealand wool, be the future of our natural fibre industry and important in a low-carbon economy?

I don't see why not.

And alongside innovative commercial partnerships, for such a movement to occur we need to support the industry to scale up - from agronomy and harvesting to processing and fibre research.

There are farmers successfully growing hemp in Otago and Southland, as well as further north.

And just imagine if we could close the loop, connecting the internationally recognised Otago Polytechnic Fashion Design School and designers of the future with the land and farmers - creating the fashion circular economy of the future.

That's a reason to get up in the morning!

As on the Island of Harris: nae synthetic fibre.