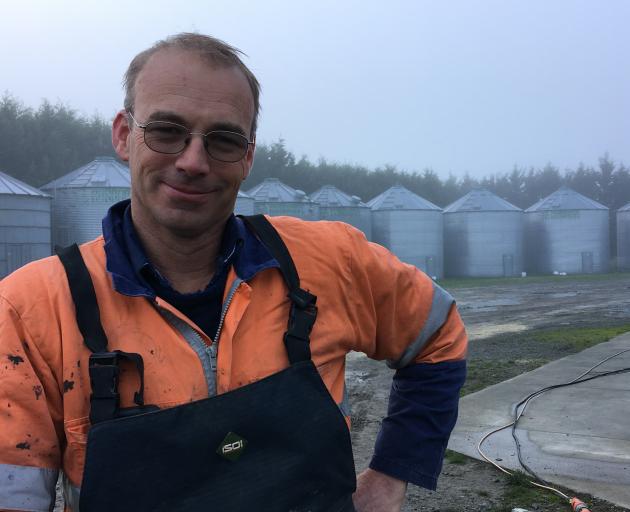 Federated Farmers Mid Canterbury president David Clark foresees a food crisis fast approaching as a result of rising costs. PHOTO: CENTRAL RURAL LIFE FILES
The price of diesel has gone up so much that it cost Valetta grain farmer David Clark $4000 to fill up his combine harvester.

By the time he had finished harvesting a milling wheat crop that night it was empty and needed filling again.

Mr Clark said there was no alternative, but to pass on the extra cost to shoppers who would have to pay more for their bread.

He said it was a sharp reminder for all those in favour of banning oil and gas that substantially increased food prices would follow.

"The tank of diesel we burnt in one day went to harvesting wheat that will be milled into flour to make bread," said Mr Clark, who is the Federated Farmers Mid Canterbury president.

"We use that diesel on behalf of the people who eat the bread and we have to make the connection between costs and food and the price that food has to be."

The price of fuel has been rising over the past year and more rapidly since Russia invaded Ukraine. Nor will farmers benefit much from the Government’s temporary cut on fuel excise and road user charges by 25 cents a litre as they do not pay road charges for farm equipment.

Mr Clark said the Government’s "big posturing statement" about taking 25c off petrol would help motorists, but did nothing to reduce the increasing cost of food production.

His rising harvester costs were revealed in a Facebook post. He said the reaction was "huge"as people comprehended the impact on food prices.

Fertiliser prices were "doubling and trebling" in a year. A 12-tonne crop of wheat removed 30kg of phosphorous/ha and the same amount of potassium and sulphur which had to be replaced or nutrients would be depleted, he said.

"Everything is going up. The food crisis we are heading into as a result of the Russian invasion in Ukraine could be the biggest food crisis globally in history. People haven’t grasped that yet."

The public was starting to feel the pain of the Government’s Emissions Trading Scheme and ban on oil and gas exploration. Government policies would reduce food production and increase the cost, he said.

He would be unable to grow irrigated wheat on his farm with new fresh water rules "as they are written today".

"He said it was a sharp reminder for all those in favour of banning oil and gas that substantially increased food prices would follow."
The reason fuel prices have gone up is because of price gouging by fossil fuel companies. The world has a gas and oil glut, the prices are controlled by cartels that control supply to inflate prices. More drilling will not change that.
And the price of fuel didn't seem to be a problem for the farmer's protests, how much fuel did they waste?

There is a finite supply of gas & oil.The amount of fuel used to drive a tractor into their local service town is not material in terms of the total fuel bill for a farm.Rural service towns would not exist if it was not for the farmer.Since 1984 this country has been increasingly losing its understanding of the importance of the rural sector.