The Shag River was clear with a good flow when i managed to reel in a 2kg brown trout (below). Photos: Mike Weddell
The wild weather of the middle of the week has raised the level of most rivers but disastrously, and with a relatively settled few days forecast most should be fishable this weekend.

If I had to pick the conditions that I go fishing in the top of the list would be when there is a stable high-pressure system for several days. This weekend is fairly close to that ideal.

The Mataura has been tantalisingly close to a good fishing level on several occasions but not enough for me to make the journey south. It is now falling and seems to have missed the midweek rain, so fingers crossed.

Another stream that is just about fishable is the Pomahaka, which can produce a good hatch of mayflies at this time of year. The good thing about a mayfly hatch is that trout will rise to them in virtually any river conditions, except when the water is rising and very dirty. Even then, I have occasionally caught fish in such conditions.

The upper Taieri remains fairly clear, even when high, and it is not unusual to see a rise if there is a hatch of mayflies. If the water is cold the hatch and rise may not last long but rivers are starting to warm up. 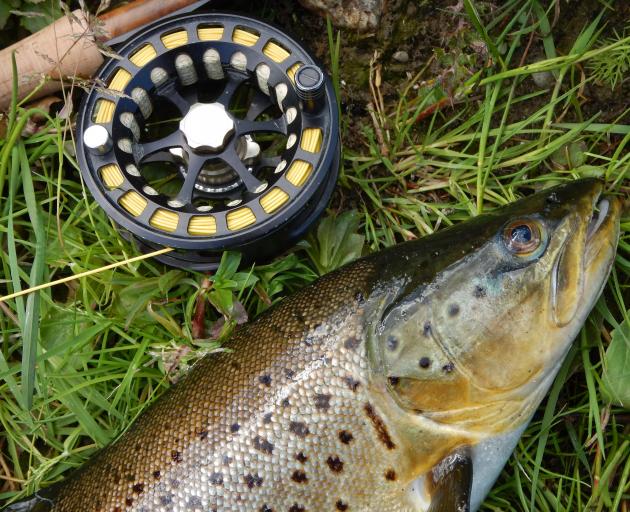 Full of confidence, I cast the nymph to the first one. It totally ignored the fly and did the same thing on several other casts. ``Must be a deviant,'' I thought and tried one of the other fish. Same result and same again with the third fish. The area they were cruising had a silty bottom so I deduced they could be taking bloodworms - they weren't.

I noticed there were quite a few water boatmen about, so I tried a suitable imitation to no avail. I then tried an unweighted nymph, even though they were feeding on the bottom. One fish took the nymph but I was not quick enough with the strike to hook it.

I ran out of ideas, but luckily it was time to go home.

I fished the Shag River recently.

It was clear with a good flow when I started and it was a fine, sunny morning, although I noticed some very dark clouds to the west. It was nice to be fishing a clear stream, the first time this season.

Half way through the morning, I suspected the water was rising as clumps of algae and weed were drifting down. The water remained clear so I continued to fish. Eventually I spotted a fish cruising over the weeds on a long flat. I plonked the hare's ear nymph in front of it and it pounced on the nymph as if it had been waiting all morning for it.

Just as I had.