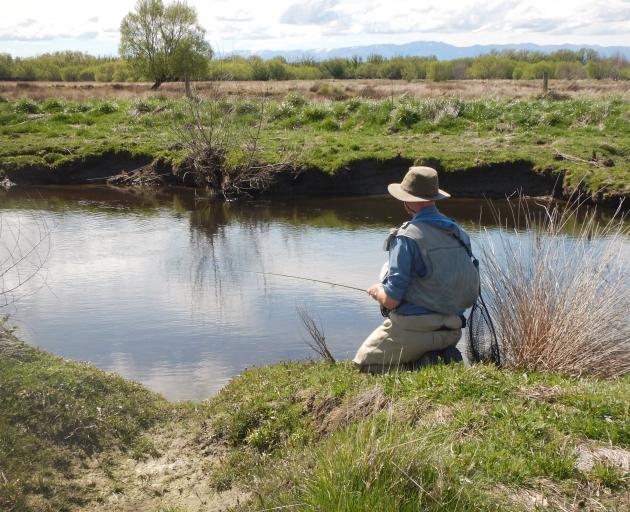 Bruce Quirey keeps a low profile while casting to a rising. PHOTOS: MIKE WEDDELL
The rain at the beginning of this week raised river levels a little but they are dropping and should continue to do so. This, combined with a good weather forecast, bodes well for the holiday weekend.

For many anglers, this will be the first opportunity to fish for the season as they head off to Central Otago or the upper Waitaki.

Good conditions combined with lighter evenings give chances of good fishing. There is a better chance of catching a few fish in the last couple of hours of daylight and the first hour of darkness, especially on warmer evenings.

There could well be a fall of mayfly spinner or a sedge hatch. Trout will rise to these if they are present and means your fly should be somewhere near a fish when it hits the water, shifting the odds in your favour compared with fishing blind.

The upper Clutha is well worth fishing with a sedge imitation even if there are no rises. 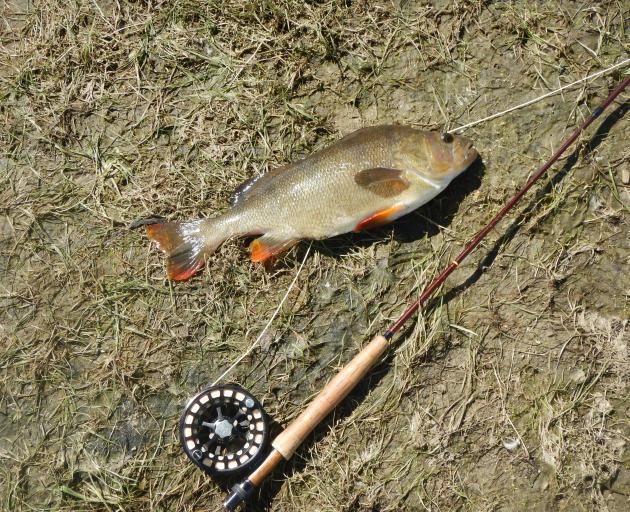 The 1.2kg perch I caught in a backwater.
Areas of slack water adjacent to the main current should be targeted, either skating an adult sedge across the surface or retrieving a subsurface pupa pattern.

If you get a chance to fish smaller streams there should be a hatch of mayflies from noon on. Even just a few duns will bring fish to the surface.

It is easier to catch fish if there are just enough to bring them up, as they tend to take every fly that comes their way. If there are too many naturals, trout will ignore some of them, and yours may be one of those.

Make sure your imitation drifts right over the targeted fish, as they prefer flies that entail using as little energy as possible.

If you can get out during the day, walking the edges of a lake spotting fish in the shallows can give good sport. Small bully patterns, water boatman, or snail imitations should work. Cast well ahead of a cruising fish and give the fly a twitch when it gets close.

On the subject of mayflies, Bruce Quirey and I struck a short spares hatch of duns on the Taieri on Sunday afternoon.

It was sunny and calm, which made for pleasant fishing, but also made the fish spooky.

I spotted several fish rising close to the far bank between two bushes. They were moving about a lot (the trout not the bushes) and a combination of long range and movement made it hard to get the fly in the right spot at the right time.

There was no response to an unweighted nymph so I tried an emerger and caught a nice 2kg fish, and had another couple of follows as I was lifting off. The same fly worked again further up the river with a slightly smaller fish.

Earlier in the day when fishing a backwater, I caught my best perch on a fly, it took a water boatman. I like catching perch for variety.