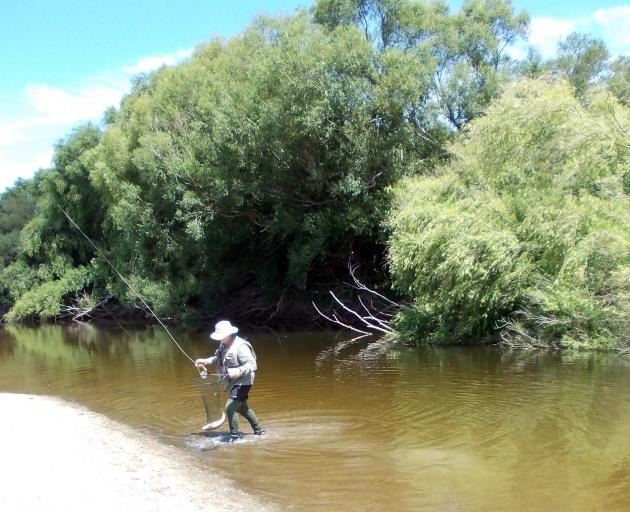 Murray Smart lands a good fish from the Taieri on a willow grub. PHOTOS: MIKE WEDDELL
There is some rain forecast for the weekend and early next week, but hopefully not enough to spoil the chances of catching a fish.

The Pomahaka that I mentioned fishing last week had a rise in water level since then but has now dropped to a good level again and is well worth a visit. The Mataura, too, is looking good and most of our small streams should be worth fishing, except maybe the Shag as it is getting very low.

The Taieri would probably be the best pick as it is looking good throughout its length.

One part of the river that does not seem to get fished much is Strath Taieri. I fish it about twice a year but it needs to be low as it is at the moment, as it is heavily willowed along much of its banks.

At the current height it is easily waded, giving access between the willows on both banks. It is especially good when willow grub are falling on the water and this fall should not be too far away.

Even without the willow grub it is worth a visit as there is a reasonable population of mayfly and I have had good fishing to both the dun and spinner stages even in hot sunny weather. I think the shade of the willows helps in this respect.

There are also lots of sedges and although I have never fished an evening rise there, I am sure fish would be feeding on them around sundown. Although some of the banks are a little rough, access is not too bad if staying in the water.

The average weight of the trout is not massive but there are plenty of trout in the 1kg-1.5kg bracket and the odd one bigger still.

On the subject of the Taieri, I fished the Taieri earlier this week in Maniototo. The water looked in good order when I started, quite a lot lower than when I fished there a couple of weeks ago and clearer.

It was cool and overcast when I set off downstream but the sun soon came out making it a very pleasant day and it brought out the insects. A few mayflies and lots of sedges.

I saw very few rises as I walked down but, as I began to fish back up, I came across a group of fish rising in a short ripple. There were spinners coming down, so I put on an imitation and the first fish I covered nailed it.

After returning the fish I put the fly to the others and rose three of them but failed to hook them and all rises stopped.

In the next pool there were two rising but when approaching I almost stood on a mallard which thrashed up the pool, putting them down.

I swapped to diving beetle imitation and covered the odd fish that were rising and picked up several before getting back to the car for a welcome cup of tea.