Opportunity for shearers keen to learn 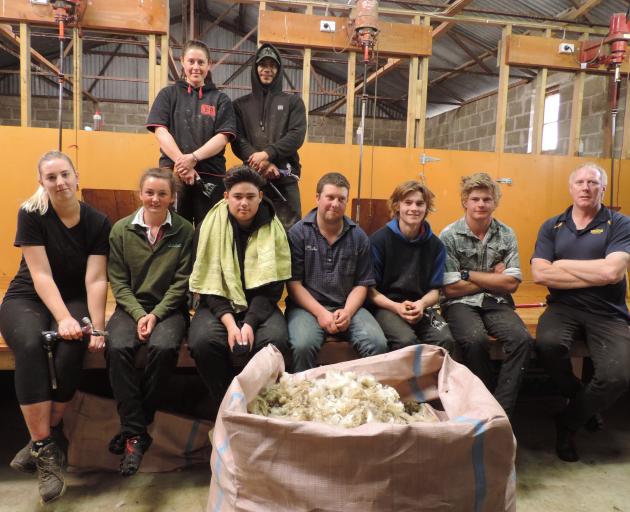 Those are the words of wisdom from Elite Shearer Training tutor Norm Harraway. He was instructing eight people on a beginner shearing course at Matt and Nichola Smith's Ardenfield woolshed near Waimate last week.

Mr Harraway was a shearer for 33 years and has been an instructor for 17.

He said previous generations' practice of slogging away as a shearer for 10 years until you could put a deposit on a farm was ''not a goal any more''.

''It's the lifestyle - that's what people get addicted to.

Some shearers worked a six-month circuit overseas and the next six months back in New Zealand.

There was work available in Italy, the United Kingdom, and the United States, and farmers everywhere were down-to-earth people who treated others well, Mr Harraway said.

The trainees had a mix of experience in woolsheds but none had shorn commercially or professionally.

Three aimed to become full-time shearers. Jah Raukawa and Tesni Paewai said money was a motivator, along with the fact their whole whanau was involved in the industry.

Mr Harraway did not mind what had led to their enrolment in the four-day course, ''as long as they're willing to learn''.

Today's shearing method was still based on the famous ''Bowen technique'' pioneered by Kiwi Godfrey Bowen in the 1950s, holding the sheep between the knees and using the non-shearing hand to stretch out the sheep's skin.

It has ''evolved'' since then but the basics were the same, Mr Harraway said.

The trainees were shown how to hold the sheep and how to stand so they minimised the risk of injury - especially the backache that has been the bane of the industry.

''They go hunting and go to the gym. I never used to.

''They're a lot more aware of their health.

''They learn the proper technique.''

Knowing how to care for their gear was another important aspect of the course, he said.

''They're all sharpening their own gear.''

When asked what they valued most about the course, one said ''everything'' and others said knowing how to sharpen their gear, put their handpiece together, and learn the right terms.

Mr Harraway said a handpiece cost around $900. Its design had changed little in the last several decades, apart from the bearings.

''It's the same engineering principles.''

The trainees had completed a ''clean shear'' on the second day of the course and would do another on the fourth day, to see how much they had improved. They would be assessed on numbers and quality - especially the latter, he said.

Elite Shearer Training was still able to fill its courses, but it was ''harder at the moment because of the lack of funding in the industry''.

There was shearing work available for those who wanted to work, Mr Harraway said.

Those who completed the course ''won't go straight on to a stand'' but would probably become pressers or wool handlers to gain more experience in the sector.

Most South Island shearers travelled from home to the woolshed each day. They did not stay in shearers' quarters on the farms very much, although North Islanders who came south for the season might do so.

One of the trainees came from much further afield - Norway. Malin Heimdal said she was not familiar with the shearing industry back home, but the season was starting there now.

She has been in New Zealand for eight months.

Asked if her fellow trainees were giving her a hard time, one quipped that the sheep were.