1 Comment
Pest Free Pisa Moorings is one step closer to transforming its lakeside settlement into a bunny-free oasis.

For the past 18 months, the volunteer group has been leading the way in the battle against the barrage of rabbits which have plagued the Central Otago community.

The group has eradicated an estimated 90% of the pest population.

Members marked the completion of the next stage of their fight — the installation of two rabbit-stops (similar to cow-stops but designed to prevent rabbits crossing) at the community’s entry points on the Lake Dunstan Cycling and Walking Trail — with a small celebration on Tuesday.

The rabbit-stops will prevent rabbits entering the subdivision via the cycle trail and add to the ways the group was already combatting the pest — magtoxin gas, rabbit-proof fencing and digging up burrows. 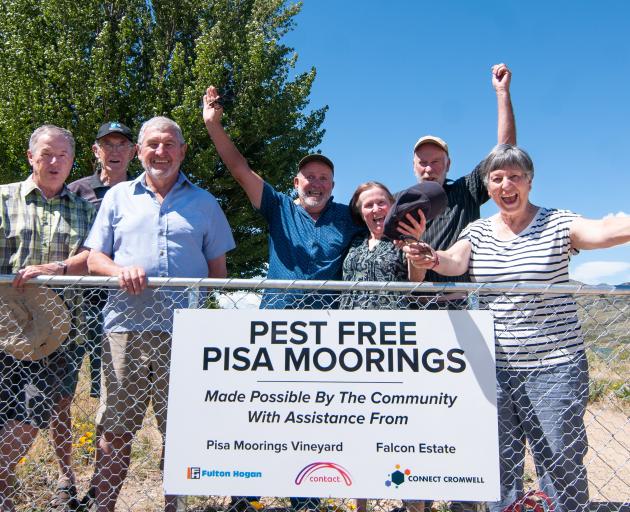 Pest Free Pisa Moorings chairman Ian Kemp said volunteers had spent more than 500 hours during the past 18 months combating the pest and the results were better than he could have anticipated.

"When I moved here two years ago, we would go for a walk and the whole ground would move with rabbits.

"It’s been a really, really successful story — the rabbits had been a real problem but now, the hard work’s done," he said.

"We haven’t finished. We will maintain these for years to come."

Rabbits were now restricted in how they could enter the settlement, and the focus would next turn to removing those still within its boundary, he said.

The addition of ferret traps throughout the settlement had resulted in more than 35 ferrets being caught and the unexpected return of nesting Australasian crested grebes to the lakeside community’s inlets.

"It’s absolutely fantastic to come here today to a community that looked at a problem, saw it as their own, owned it and went ‘We’re going to fix it’ — and that’s really what it was all about today, that a group said, ‘We can do this’," he said.

Magtoxin gas? Really? Pretty pathetic that 500 people have nothing better to do with their lives than enforce a slow, lingering and painful death on rabbits. A sad indictment on humanity.