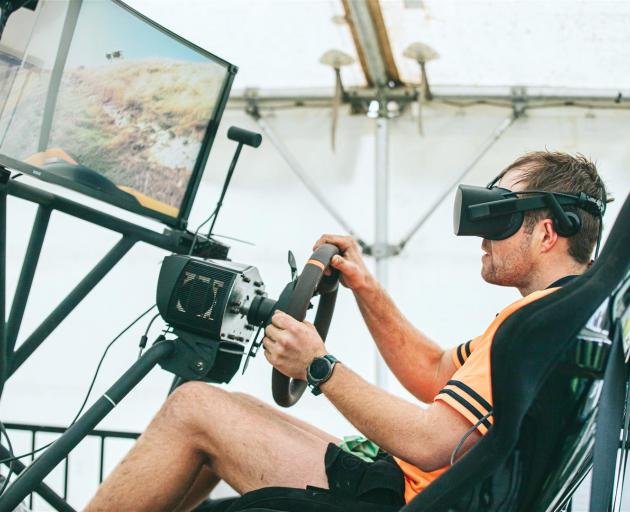 Alan Harvey, of Oamaru, tests his skills in a virtual reality off-road driving simulator during the grand final of the FMG Young Farmer of the Year this month. PHOTO: NEW ZEALAND YOUNG FARMERS
Contestants in this year's FMG Young Farmer of the Year grand final had an opportunity to drive around a South Otago farm while counting sheep - all without leaving Hawke's Bay.

That was thanks to a virtual-reality driving simulator developed by Otago-based CoDrivr which was founded by rally driver and farmer Rhys Gardner.

WorkSafe used the simulator, which was on a motion platform allowing it to move on different angles, on its site at the National Fieldays at Mystery Creek in June.

About 570 people, from teenagers to a nonagenarian, tested their skills.

Mr Gardner said it started discussions about new ways to learn and train without the normal risks associated with that.

"Everybody learns by just doing it,'' he said.

If they made a mistake, they got away with it - and hopefully learned from it - which did not alway happen in a real-life situation, he said.

Mr Gardner picked a "really dodgy area'' that included a track going around the side of a hill with a big drop-off along the edge.

That same technology was used as a module in the Young Farmer of the Year grand final where the contestants had to "drive'' along about 1km of that farm track and then answer various questions, including how many stock they saw and other general observations.

Some of the contestants were "unbelievable'', being able to count three different classes of stock at the same time as driving, which Mr Gardner thought was virtually impossible.

There were some challenges with motion sickness, given they had been running around all day, and the lens fogged up when they jumped in the simulator with "steam coming off them'', he said.

Mr Gardner's own rallying career was on hold as he focused on his business.

The recent developments were also opening some discussions around quad-bike training and tractor safety.

He was finding many people had been looking for such a tool for quite a while but the cost had been out of range and the quality had not been high enough.

"We think we can fill that gap,'' Mr Gardner said.

It was great to see the likes of WorkSafe being so progressive in exploring new tools to reduce risk.

Ideally, the big picture plan was to keep extending a partnership model and use it as a platform for doing projects that had high value in terms of social problems, he said.