Sheep milking to be showcased 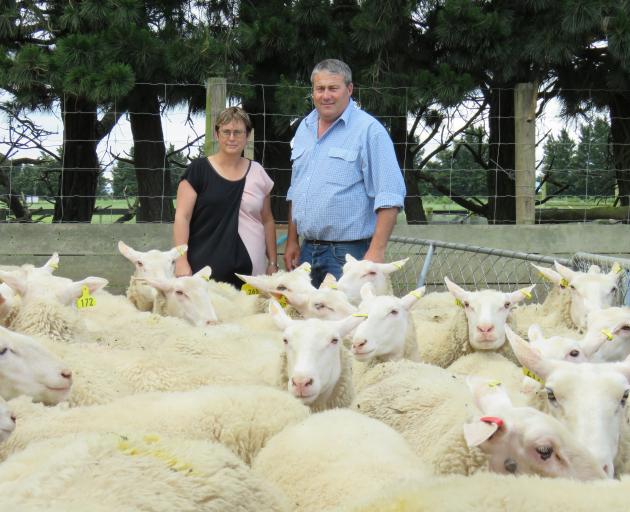 Tracey and Matt Jones say sheep milk is a nutritional powerhouse and the go-to alternative for people with gut health issues and dairy intolerances. PHOTO: ANNETTE SCOTT
Matt and Tracey Jones will display their sheep milking operation tomorrow at Strathclyde Stud, in an open day event at Kirwee.

Sheep Milk New Zealand will join with the Joneses in running the open day at Tuscany Downs on West Coast Road, from 1pm.

There will also be industry speakers — able to highlight an industry capable of generating $250million in sheep milk export products by 2024, and which is already generating profitability for farmers in the North Island — and sheep milking demonstrations on show.

The Joneses started farming East Friesians in 2011 and established Strathclyde Stud in 2012, after a career in traditional sheep farming practices.

Mr Jones, who is managing director of Agri Training at Winchmore, said they visited sheep milk farms in the United Kingdom, Ireland, Canada, Switzerland and the Netherlands to evaluate breeds and farming methods for best practice and milk production.

They found East Friesian were internationally considered the best breed for milking.

“Sheep offer flexibility, so it wasn’t difficult to begin a milking herd alongside our wool and meat breeds. They are cleaner to milk, have less effluent, are easier on grazing and require less water,” he said.

With stringent new dairy farm regulations for fencing, caps on the use of nitrates for fertilisation, reporting, and exclusion of dairy cattle from wetlands and rivers, sheep farming, and sheep milk production offered a significantly reduced impact on the environment.

It meant less cost mitigating that impact for the farmer.

Sheep milk is proving itself to be a nutritional powerhouse and the go-to alternative for people with gut health issues and dairy intolerances.

Easily digestible, with higher essential amino acids than cow’s milk, sheep milk has been providing a plethora of health benefits.

“It is the best, cleanest A2 milk there is,’’ Mr Jones said.

“It doesn’t require chemical processing like the current lactose-free options, which makes it a great fit not only for local markets but also for Asian markets.

“We began commercial milking in 2019 and now we are in the process of breeding an outdoor animal that produces 100 milk solids in lactation, a giant leap from the 57 national average.”

Drawing on the Lacaune breed for udder confirmation and increased let-down time and the Maech Tete Rousse and Assaf breeds for hardiness, the Joneses are working with Ian McDougal, of Farmgene, an international geneticist specialising in artificial breeding.

They used embryos and semen imported from the UK.