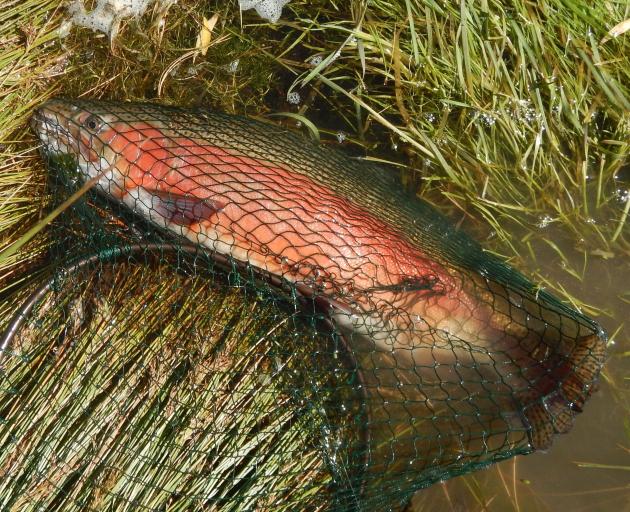 A fine rainbow jack of 3.75kg from Blakelys Dam, near Ranfurly. PHOTO: MIKE WEDDELL
River levels have dropped very low over the past week but luckily it has not been too hot and water temperatures have remained within the comfort zone.

The weather looks a bit patchy for the weekend, but hopefully there will not be enough rain to cause problems for keen anglers.

Again, there will be the problem of deciding where to fish as we are spoilt for choice.

The whole of the Taieri is looking good: the lower river has shoals of inanga everywhere and good-sized trout are smacking into them.

They chase these little fish against the bank then charge into the shoals. They grab what they can, then mop up any that have been injured.

For spin fishers a small silvery lure should interest these trout. For fly fishers a buoyant imitation drifted through the areas of activity will pick up fish.

Elsewhere on the Taieri there are still fish feeding on willow grub.

It helps if it is calm for both willow grub fishing or if you are after the inanga feeders, as it makes it easier to get lure or fly near the fish. If visibility is poor it can be a bit of a lottery.

The Mataura is very low and clear now and ideal for fishing.

Fish can be spotted feeding in the ripples and are catchable on the nymph. If it is warm and calm, they may rise to mayfly spinners which can be challenging but interesting fishing.

Last Friday, I fished the Maniototo starting on Blakelys Dam on a perfect morning.

It was still cool when I began fishing and there were few rises. Even though most of these fish were out of range it was encouraging to see them.

I covered most of my favourite spots with a damsel fly nymph on the point and a water boatman on the dropper, to no avail.

Then after about four hours of fishing I had a take which I did not hook. Casting again to the same spot, the fly was hit hard; this time the fish was well attached and was heading off at a high rate of knots.

It was doing a tour of all the local weed beds and my line was pointing straight in front of me, and the fish was jumping over to my left.

Eventually the line came free of the weeds and came close enough to net, and I was surprised by the size of the fish.

It was a fine jack rainbow of just under 4kg. Even more surprising was the fact that it had taken the No14 water boatman rather than the No10 damsel nymph.

I might not have played it so confidently if I had known it was on the small fly.

Shortly after, several fish began rising over small area. I positioned myself to cover them and immediately hooked one which promptly buried itself in the weed and smashed off. Well, you win some, you lose some.