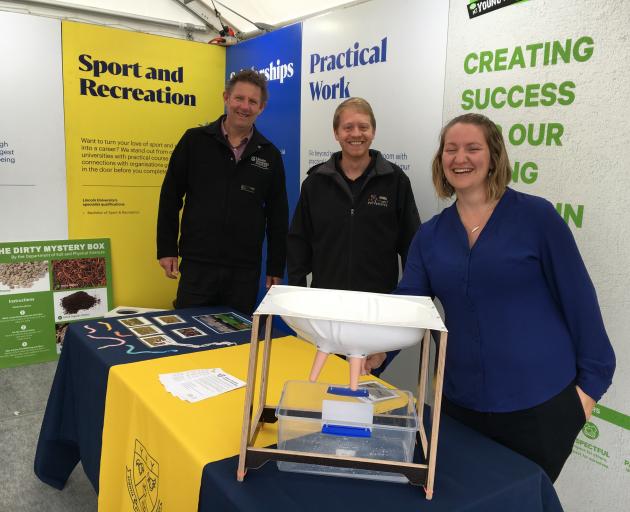 Lincoln and Canterbury Universities have joined forces to offer an initiative for the region’s school pupils, Children’s University.

‘‘It’s about exposing children to higher education and lifelong learning and getting people to understand there’s a lot of opportunities out there,’’ Children’s University Canterbury Partnership learning co-ordinator Jack Swannell said.

‘‘We are bringing students on to farms and exposing them to it and showing them what careers are available. The key is to open their mind to the opportunities.’’

Lincoln University educational facilitator Lauren Roberts said there was ‘‘a lot of negativity’’ about agriculture, ‘‘but most of our export earnings come from farming’’.

‘‘Getting kids on to farms allows us to highlight that it’s not just about feeding cows or sheep. There’s a lot more to it.

‘‘We need bright young people coming into the rural sector. Agriculture is the practical use of science — the science of the ground.’’

Children’s University was about ‘‘learning what it’s all about and having a really good time’’.

While Lincoln University’s involvement in the programme was focused on agriculture, the University of Canterbury offered opportunities across a range of subjects, Mr Swannell said.

Children’s University had been running in Australia for a number of years for children aged from 7 to 18, with 15,000 children participating in the programme.

The Canterbury Partnership was introduced this year and is the first of its kind in New Zealand.

While 150 children participated in the programme’s first year, there were plans to expand it to 600 pupils next year.

Children joined the programme through their school or runanga and were issued with a ‘‘passport to learning’’, which they filled out as they completed hours of learning outside the classroom at ‘‘registered learning destinations’’ and through online activities, Mr Swannell said.

‘‘We’re getting a lot of support from the Christchurch City Council because it’s getting families and children into different places in the community such as libraries, museums and parks.’’

Participants who received stamps for 30 hours or more of learning in the passport were invited to attend a graduation ceremony at the Christchurch Town Hall.

One pupil had completed 217 hours this year, Mr Swannell said.