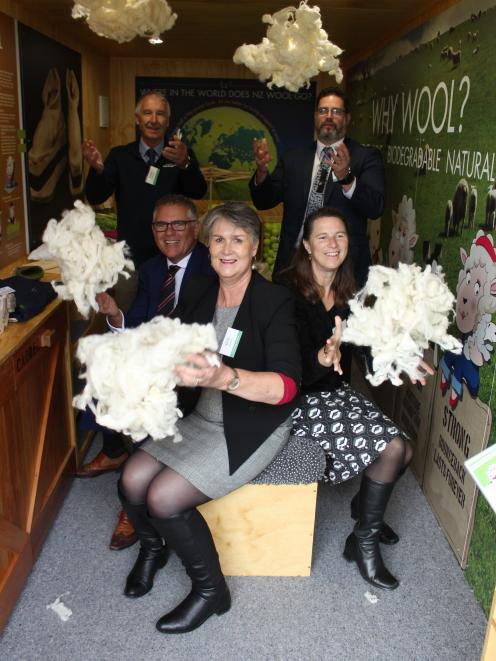 Celebrating the launch of the ``wool shed'' at Aparima College are (clockwise from back left) PGG Wrightson Wool general manager Grant Edwards, Campaign for Wool trustee Craig Smith, Wool in Schools project manager Vicki Linstrom. Aparima College head of English Lynne Grove and Aparima College principal Cameron Davis. Photo: Nicole Sharp
Teenagers will be encouraged to come up with ways to use wool creatively in a bid to have them take up the torch as ''Generation Wool''.

Campaign for Wool board member and former chairman Craig Smith officially opened the South Island's new ''wool shed'' in Riverton recently, but it is no normal wool shed.

Accompanied by Wool in Schools project manager Vicki Linstrom and PGG Wrightson Wool general manager Grant Edwards, the ''wool shed,'' an education resource, initiated by the Campaign for Wool, was delivered to its first stop at Aparima College.

At a time of poor prices for crossbred wool the entire industry needed to be working together to promote its benefits, Mr Smith said.

There had been many attempts at imitating wool and what it could do, but there was no substitute, he said.

''It's hugely important that we educate 'Generation Wool'.''

Ms Linstrom said the wool shed was created to get children thinking about creative ways they could use wool, as Karen Walker had with her trendy anti-pollution face mask covers.

''We want to make people aware wool is an amazing product.''

The wool shed would show pupils wool's journey from its source to the final product, a tennis ball.

Campaign for Wools was fortunate to have the backing of PGG Wrightson and past general manager Cedric Bayly was instrumental in getting Wools in Schools started, Mr Smith said.

''As an industry without the support of our growers and brokers and people in the the industry, we don't have an industry.''

The group was horrified to find out they could not buy New Zealand wool locally, she said.

Mr Edwards said PGG was proud to be on board with Wool in Schools as it also taught pupils about sustainability as well as the merits of wool.

''It's about sustainability. Wool is a magnificent product and we don't tell the story enough.''

The entire school would go through the wool shed before it moved on to other schools in the South Island.

Another ''wool shed'' in the North Island had been travelling around schools for the past three years.