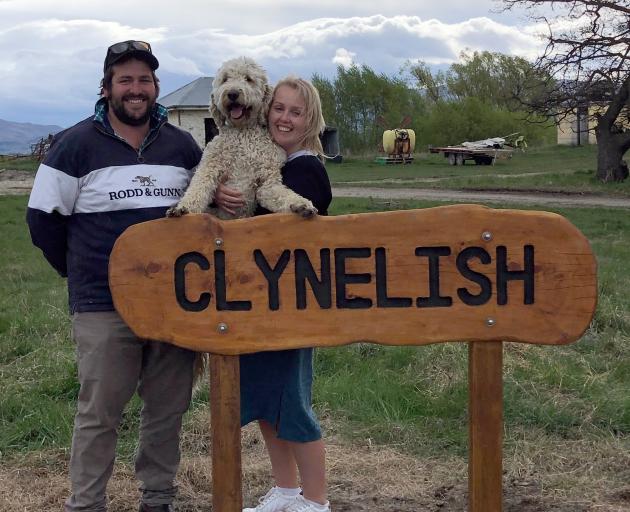 Chris and Jaimee Pemberton, with dog Basil, at their home in Becks in Central Otago. PHOTO: SUPPLIED
Central Otago agronomist Jaimee Pemberton traded the city for country life and has not looked back. She talks to business and rural editor Sally Rae.

When Jaimee Pemberton was growing up in Timaru, she pondered three very different career paths — agriculture, marine biology and drama.

Those diverse options could have resulted in very different lifestyles, but the 28-year-old former city girl has no regrets about choosing a career in the rural sector.

Mrs Pemberton (28) lives on a farm in Becks, in the heart of rural Central Otago, with her husband Chris. The couple are expecting their first child at the end of May.

Her first taste of agriculture was working in shearing sheds as a 15-year-old, the connection through a school friend whose father was a shearing contractor.

When it came to tertiary study, she had been tossing up English and drama or "something science-y". In a last-minute random decision, she decided to study agriculture.

Her fashion designer mother was somewhat shocked — "she was like, ‘where did this come from?’," Mrs Pemberton recalled.

She acknowledged her first year at Lincoln University was hard, as the majority of the class came from rural towns or backgrounds. They understood what terms such as "heifer" meant, whereas the city-dweller had no idea. But by the time she got to her second year, she felt like she had caught up a little.

Lacking practical farm experience, Mrs Pemberton spent university summers working on a dairy farm at Rangitata, and she was very grateful to her bosses for taking on a very green young worker.

"Looking back now, why the hell did they hire me?" she said, laughing.

On graduating, she got a job with Ravensdown and went through its graduate programme, which was a good way of easing into the workforce.

After a year in Christchurch, she moved to Hawea in a field role. Future husband Chris, then farming at Millers Flat, was one of her clients.

She later took a job with PGG Wrightson Seeds as an agronomist. The couple moved to Becks about 18 months ago when farmers Karl and Ro McDiarmid offered to go into a 50:50 equity partnership with them.

Previously, they had been farming with Mr Pemberton’s parents at Millers Flat, who then retired to Wanaka. The Pembertons’ goal was to buy the McDiarmids out within 10 years.

It is mostly dairy grazing and beef cattle on the property, which has three centre pivots. Mr Pemberton also runs an agricultural contracting business and is busy with baleage and haymaking.

They have about three full-time workers, but Mrs Pemberton said they could do with six as, like many other contracting businesses, staffing had been affected by border closures. They were fortunate to have some "awesome local guys", she said.

It was a very busy household but it also worked well. Her husband’s two passions were stock and machinery, while she handled the agronomy and plant science side of the property.

"The farm — I joke it’s a giant trial, but it’s not. I don’t try anything too wild on farm — it still needs to be profitable."

The property is home to PGG Wrightson Seeds’ regional research site, which she said provided a good contrast to the much wetter research site in Gore.

The couple enjoyed living in Central Otago and doing what they were doing.

"We were just saying this the other day, we’ve had some amazing luck over the years. We’re very blessed how things have worked out. We love it here — it’s such a good community."

Coincidentally, when she first moved to Central Otago, an area that was "pretty new" to her, she used to come to the area she now lived in for work and had always thought she would love to live near St Bathans one day — "just randomly".

Mrs Pemberton has been an enthusiastic attendee at Agri-Women Development Trust (AWDT) courses, saying all she had completed had been "awesome". She and her husband had done one together, looking at pathways into farm ownership.

They were between the two properties at the time when they got phone call to see if they were interested in the 50:50 partnership, literally as they were walking out of the course.

One of her goals was giving back to the community. Growing up in town, community was "something you had around you but it wasn’t as important as it is here".

"Everyone has to take on something and chip in."

Her involvement with AWDT had taught her not to "just take on everything and anything". It was about identifying skill sets and interests and matching those to opportunities, she said.

With motherhood looming, she was "in that transition period of life". She was phasing into a new role at work, still in the agronomy field but shifting more into social media and technology.

When it came to the future of the rural sector, she was a "really positive person" and she believed there were huge opportunities.

"It’s just potentially going to look a bit different to how we’re farming at the moment."

With their own farming operation, she and her husband were heavily into cattle but they were very open and interested in looking at arable options.

They had already noticed climate patterns changing slightly, so it was about how to use that to their advantage. They were also looking to change plant species to those that were more heat and drought tolerant so they did not have to rely on irrigation so much.

The future of farming would "take a bit of open-mindedness and thinking outside the box", but people would always need food and there were huge opportunities there.

When she and her husband were looking at farms, they were looking for a property that could be farmed "for lots of different things", Mrs Pemberton said.

She was very thankful she had made the choice to join the sector, and that was something she thought about "quite a lot". And her latest home now felt like home.

She had discovered that her great-grandmother grew up in the area, something she previously never realised, and there were family ties to the area that went back three or four generations.

The couple’s property was on the snowline and Mrs Pemberton joked she still had "that townie girl" in her, as she got still excited when it snowed — her husband not so much.

Living rurally meant the ability to have four dogs, while the Blue Lake was "just up the road" at St Bathans for a swim.

The recent addition of an extra bar of cellphone reception in the area and an improvement in internet connectivity had changed her life, while the nearby Wee Red Coffee Shed provided "beautiful" coffee.

Asked what advice she would give to young people considering a career in agriculture, even if they — like her — did not come from a rural background, Mrs Pemberton said to be curious and believe in yourself. The sector was desperate for more people and there were so many opportunities within it and scope for careers.

It used to be a male-dominated industry but that had changed and there was the opportunity to work in some beautiful places most people would never see.