Alexandra a home away from the Shire 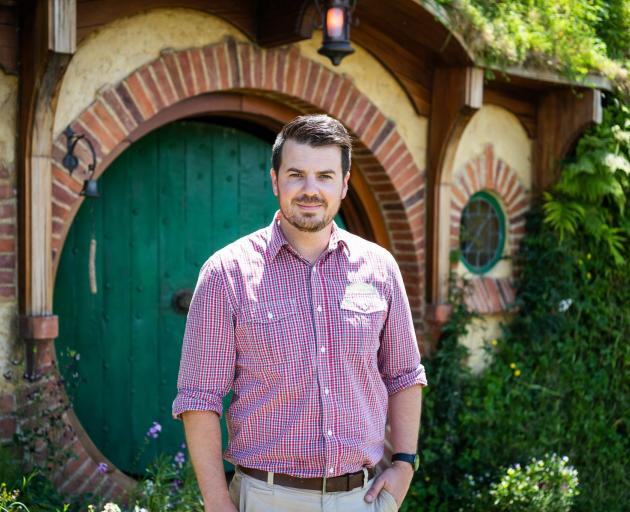 Alexandra’s Shayne Forrest, who was recently appointed to Tourism Central Otago’s advisory board. He is also the deputy chief executive and general manager of marketing and commercial for Hobbiton Movie Set Tours.PHOTO: SUPPLIED
This year marks the 20th anniversary of the release of the first Lord of the Rings films, The Fellowship of the Ring. An Alexandra man is playing a special part in these celebrations, through his work at the Hobbiton movie set in rural Matamata. Mary-Jo Tohill reports.

In times like these, Kiwi people, whether they are rural or not, can probably relate to hobbits.

We like our home comforts and the plot of dirt that we have been sticking closely to of late.

If it came to a head-to-head battle with an orc, it would be like pitting a John Deere ride-on against a Case 600 tractor.

But as we are proving against the Delta invader, like the hobbit, we are getting pretty good at going to ground here in Middle-earth.

Ask Alexandra man Shayne Forrest, and he would tell you he has a lot in common with hobbits.

‘‘I identify with any of the hobbits but most probably Sam (Samwise Gamgee).

‘‘Like Hobbits, I enjoy good company, the comforts of home and plenty of home-cooked meals.’’

His ideal ‘‘second breakfast’’ would be bacon, eggs, sausages, tomatoes and, potatoes. 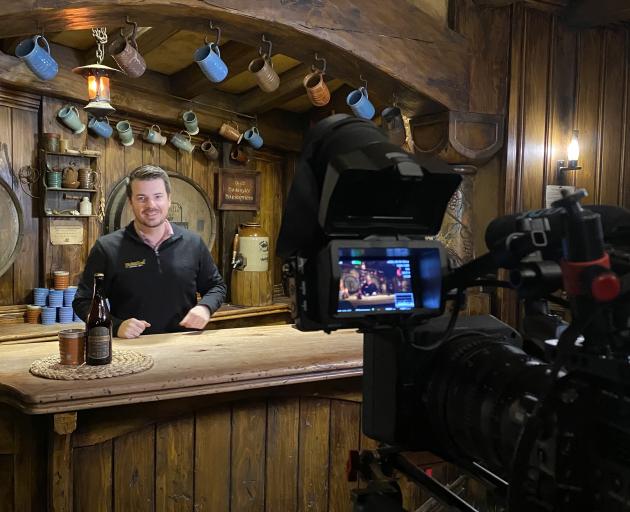 Hobbiton Movie Set Tours deputy chief executive Shayne Forrest serves at The Green Dragon tavern during an AM Show shoot at the Matamata-based tourist attraction. PHOTO: SUPPLIED
It is a tough job serving beer at The Green Dragon, the movie tour pub in the middle the Hobbiton village set near Matamata. But someone’s gotta do it and he has been for about 10 years.

The original rural Shire of author J.R.R. Tolkien’s imagination was constructed of polystyrene and plywood, and torn down after the completion of The Lord of the Rings trilogy, which celebrates the 20th anniversary of the first film later this year.

It was never meant to be a permanent set, but when film-maker Peter Jackson’s team began rebuilding Hobbiton for The Hobbit movies in 2010, they decided to make the homes more permanent. Using concrete, wood and bricks, it took 70 set builders to complete.

It is a second home to Mr Forrest (32), who is also Hobbiton’s general manager of marketing and commercial.

His first home is Central Otago, and he maintains strong connections to the district where he was born and grew up with his recent appointment on the Central Otago tourism advisory board.

A pandemic is just another challenge. In the words of the humble gardener Sam in The Fellowship of the Ring:

‘‘I know we are going to take a very long road, into darkness; but I know I can’t turn back. It isn’t to see Elves now, nor dragons, nor mountains, that I want; I don’t rightly know what I want: but I have something to do before the end, and it lies ahead, not in the Shire.’’

‘‘Sometimes, when I give people my business card, they are a little suspicious I may have changed my last name to fit into this Middle-earth world I now find myself in.’’

If he could build a Bag End in Alexandra/Central, it would be up the hill right beside the clock.

‘‘Beautiful views from up there.’’

If he could blow smoke rings with Gandalf, it would be on one of Maniototo’s snow-capped mountains.

His Middle-earth is the Manorburn Dam.

‘‘I’ve spent many nights out there fishing with my dad and siblings. Nothing beats a beautiful starry night out there.’’

He would also recommend the Cromwell Gorge as a fishing spot to a hobbit.

‘‘In saying that, I did catch my first fish in the Fraser Dam so I might recommend they start there.’’

If he was allowed to, he would build another Green Dragon in Clyde.

‘‘I think it would fit right into Clyde, but for now I’m pretty sure the Green Dragon won’t be flying too far away from Hobbiton.

‘‘Nothing tastes quite like the Hobbit Southfarthing range but there are very tasty local beverages I find quite refreshing when I come back home.’’

The unusual tourism and rural mix of the Hobbiton site — it is still a working sheep and beef farm — suits a boy from the South. His job with the Hobbiton tours is an unusual combination of skills: theatrical (he studied acting) and business smarts (he did a degree).

‘‘With the 100-plus locations throughout New Zealand, everyone knows the Middle-earth story and everyone links on to the legacy.’’

He grew up in Alexandra, with a quarry over the back to play in, like a dry version of Hobbiton.

‘‘I like small towns. I like living in Cambridge. It feels quite rural, yet close to everything. But I miss Central, those crisp, clean, cold winter days, the skiing, the skating that it’s all on your doorstep. And cycle trails. We don’t have that.’’

‘‘It’s a funny time to be in tourism. For some some reason, we’ve gone really well. People are exploring their own backyard. And Central Otago’s got lots of those little gems.

‘‘I reckon New Zealanders are going to be our best ambassadors for when people do start to come back. They’ll be able to point to those places.

At the end of 2019, when the coronavirus became known, he had an inkling of what was coming. About 90% of their business was overseas tourists.

‘‘We were going to lose those long-haul flights if they closed the borders, so we had to cut the cloth to the market that we knew was going to be domestic. I think we’ve done pretty well. We [Kiwis] are a lot more resilient than what we think.’’

Lockdown was going as well as it could, with three kids running around and constantly running into Zoom meetings ‘‘in various states of dress’’, he said.

‘‘All part of the fun. We’re just working from home trying to move bookings and events.

‘‘I’m planning a few events for the Lord of the Rings 20th anniversary that is in December this year, so keeping busy.’’